If a SQL statement returns an unexpected result or takes longer than expected to process, this page will help you troubleshoot the issue.

Use the slow query log or DB Console to detect slow queries in your cluster.

You can also check the service latency graph and the CPU graph on the SQL and Hardware Dashboards, respectively. If the graphs show latency spikes or CPU usage spikes, these might indicate slow queries in your cluster.

In the example below, the trace shows that there is significant latency between a push attempt on a transaction that is holding a lock (56.85ms) and that transaction being committed (131.37ms). 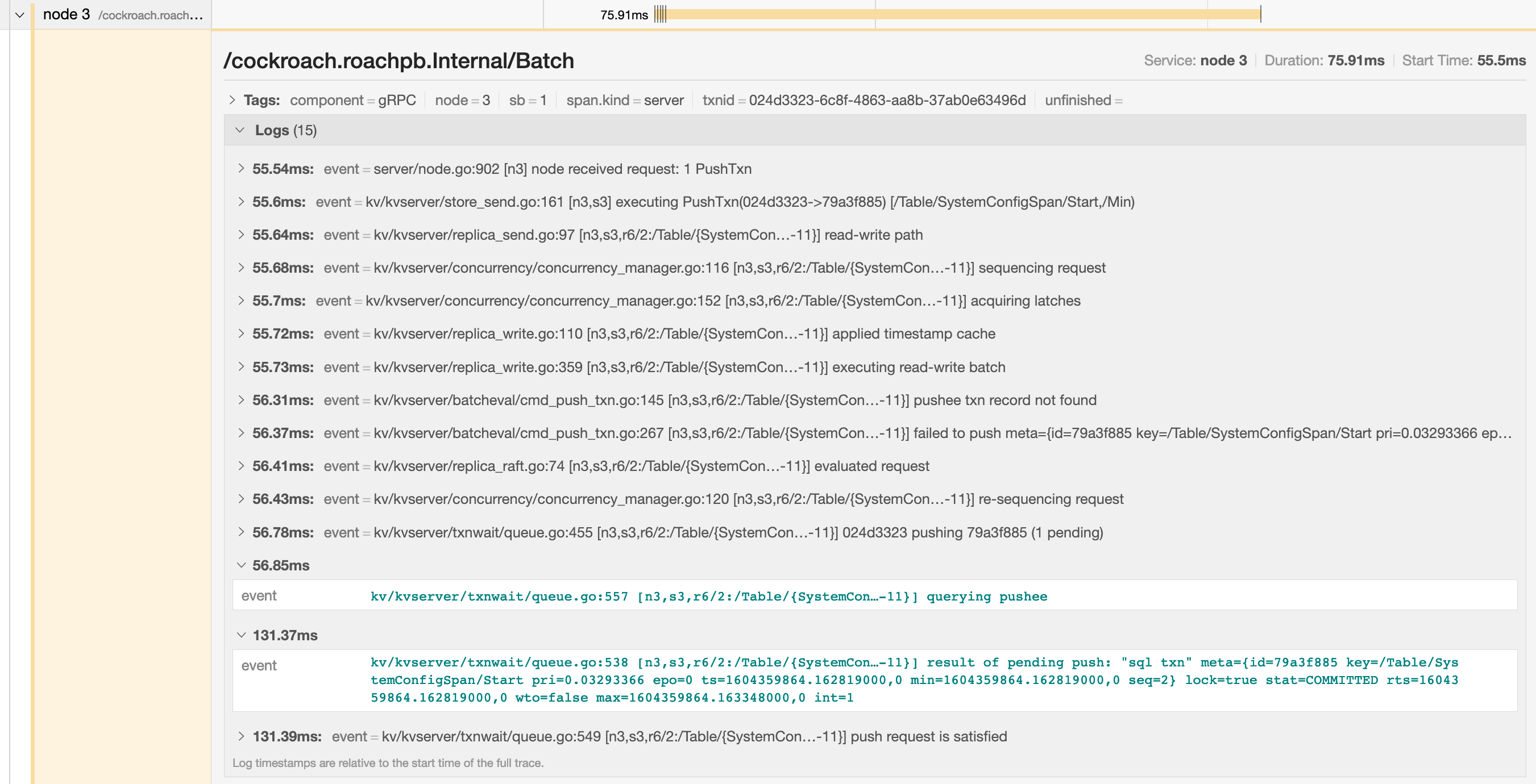 The common reasons for a sub-optimal SELECT performance are inefficient scans, full scans, and incorrect use of indexes. To improve the performance of SELECT statements, refer to the following documents:

If you have consistently slow queries in your cluster, use the Statement Details page to drill down to an individual statement and collect diagnostics for the statement. A diagnostics bundle contains a record of transaction events across nodes for the SQL statement.

You can also use an EXPLAIN ANALYZE statement, which executes a SQL query and returns a physical query plan with execution statistics. Query plans can be used to troubleshoot slow queries by indicating where time is being spent, how long a processor (i.e., a component that takes streams of input rows and processes them according to a specification) is not doing work, etc.

We recommend sending either the diagnostics bundle or the EXPLAIN ANALYZE output to our support team for analysis.

If the query performance is irregular:

Throughput is affected by the disk I/O, CPU usage, and network latency. Use the DB Console to check the following metrics:

Refer to the following documents to improve INSERT / UPDATE performance:

If a cluster is not idle, it is useful to monitor the per-node queries per second. Cockroach will automatically distribute load throughout the cluster. If one or more nodes is not performing any queries there is likely something to investigate. See exec_success and exec_errors which track operations at the KV layer and sql_{select,insert,update,delete}_count which track operations at the SQL layer.

Increasing number of nodes does not improve performance

See Why would increasing the number of nodes not result in more operations per second?

If you receive a response of bad connection or closed, this normally indicates that the node you connected to died. You can check this by connecting to another node in the cluster and running cockroach node status.

Once you find the downed node, you can check its logs (stored in cockroach-data/logs by default).

Because this kind of behavior is entirely unexpected, you should file an issue.

If you are testing CockroachDB locally and want to log queries executed just by a specific node, you can either pass a CLI flag at node startup or execute a SQL function on a running node.

Using the CLI to start a new node, use the --vmodule flag with the cockroach start command. For example, to start a single node locally and log all client-generated SQL queries it executes, you'd run:

From the SQL prompt on a running node, execute the crdb_internal.set_vmodule() function:

This will result in the following output:

Once the logging is enabled, all client-generated SQL queries executed by the node will be written to the DEV logging channel, which outputs by default to the primary cockroach log file in /cockroach-data/logs. Use the symlink cockroach.log to open the most recent log.

Try searching the rest of our docs for answers or using our other support resources, including: