CockroachDB backups operate as jobs, which are potentially long-running operations that could span multiple SQL sessions. Unlike regular SQL statements, which CockroachDB routes to the optimizer for processing, a BACKUP statement will move into a job workflow. A backup job has four main phases:

The Overview section that follows provides an outline of a backup job's process. For a more detailed explanation of how a backup job works, read from the Job creation phase section.

At a high level, CockroachDB performs the following tasks when running a backup job:

The following diagram illustrates the flow from BACKUP statement through to a complete backup in cloud storage:

A backup begins by validating the general sense of the proposed backup.

Let's take the following statement to start the backup process:

This statement is a request for a full backup of the movr database with the revision_history option.

CockroachDB will verify the options passed in the BACKUP statement and check that the user has the required privileges to take the backup. The tables are identified along with the set of key spans to back up. In this example, the backup will identify all the tables within the movr database and note that the revision_history option is required.

The ultimate aim of the job creation phase is to complete all of these checks and write the detail of what the backup job should complete to a job record.

If a detached backup was requested, the BACKUP statement is complete as it has created an uncommitted, but otherwise ready-to-run backup job. You'll find the job ID returned as output. Without the detached option, the job is committed and the statement waits to return the results until the backup job starts, runs (as described in the following sections), and terminates.

Once the job record is committed, the cluster will try to run the backup job even if a client disconnects or the node handling the BACKUP statement terminates. From this point, the backup is a persisted job that any node in the cluster can take over executing to ensure it runs. The job record will move to the system jobs table, ready for a node to claim it.

Once one of the nodes has claimed the job from the system jobs table, it will take the job record’s information and outline a plan. This node becomes the coordinator. In our example, Node 2 becomes the coordinator and starts to complete the following to prepare and resolve the targets for distributed backup work:

To map out the storage location's directory to which the nodes will write the data, the coordinator identifies the type of backup. This determines the name of the new (or edited) directory to store the backup files in. For example, if there is an existing full backup in the target storage location, the upcoming backup will be incremental and therefore append to the full backup after any existing incremental layers discovered in it.

For more information on how CockroachDB structures backups in storage, see Backup collections.

In this part of the resolution phase, the coordinator will calculate all the necessary spans of keys and their time ranges that the cluster needs to export for this backup. It divides the key spans based on which node is the leaseholder of the range for that key span. Every node has a SQL processor on it to process the backup plan that the coordinator will pass to it. Typically, it is the backup SQL processor on the leaseholder node for the key span that will complete the export work.

Each of the node's backup SQL processors are responsible for:

Since any node in a cluster can become the coordinator and all nodes could be responsible for exporting data during a backup, it is necessary that all nodes can connect to the backup storage location.

In the following diagram, Node 2 and Node 3 contain the leaseholders for the R1 and R2 ranges. Therefore, in this example backup job, the backup data will be exported from these nodes to the specified storage location. 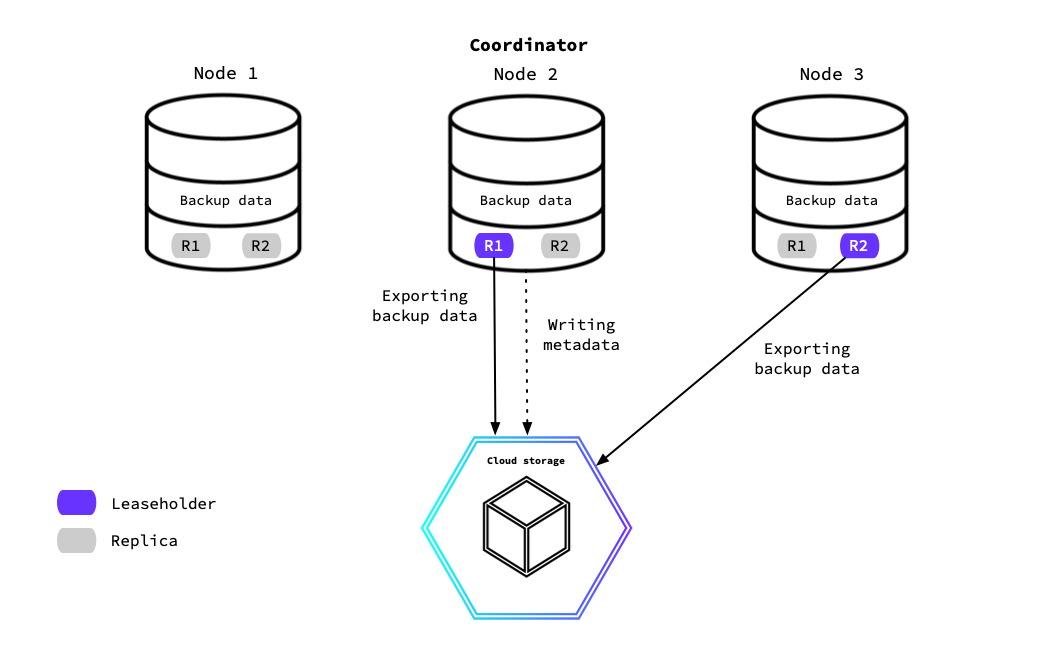 The backup metadata files describe everything a backup contains. That is, all the information a restore job will need to complete successfully. A backup without metadata files would indicate that the backup did not complete properly and would not be restorable.