For an intro to CockroachDB's core architecture and capabilities, see CockroachDB Architecture or take the free Introduction to Distributed SQL and CockroachDB course on Cockroach University.

We use the Kubernetes offerings in AWS and GCP (EKS and GKE respectively) to run CockroachDB Cloud offerings. GCP clusters use N1 standard machine types and Persistent Disk storage. AWS clusters use M5 instance types and Elastic Block Store (EBS). Each single-region cluster has a minimum of three nodes spread across three availability zones (AZ) in a cloud provider region. Multi-region clusters are similar to single-region clusters, with nodes spread across three or more AZs in each region.

Backups are encrypted in S3 and GCS buckets using the cloud provider keys.

The diagram below shows a high-level representation of a CockroachDB Dedicated multi-region cluster: 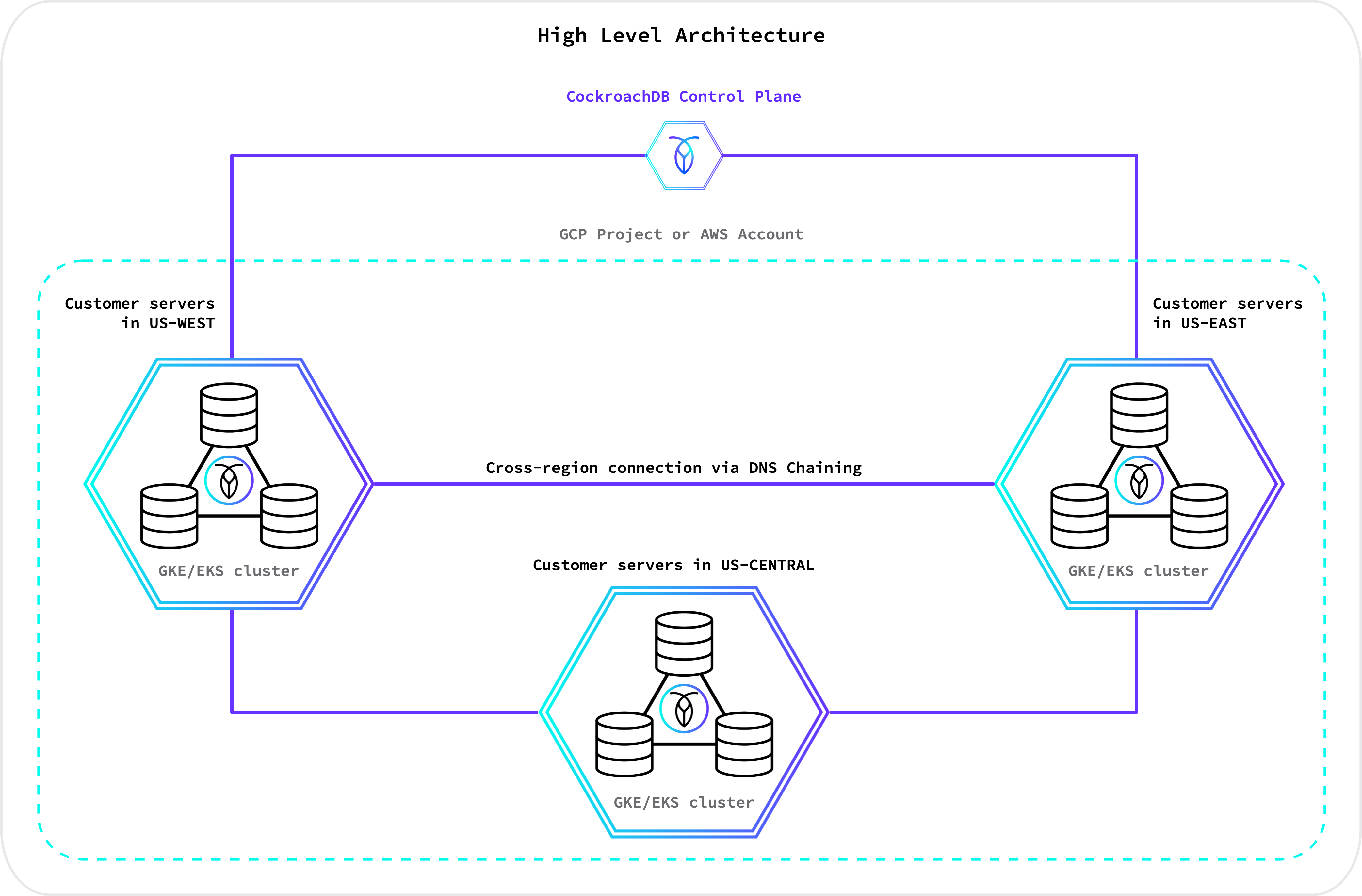 Traffic comes in from the public internet and is routed by the cloud provider’s load balancer to a Kubernetes (K8s) cluster that hosts CockroachDB. K8s pods allow CockroachDB Serverless (beta) to limit SQL resource consumption for each user. They also minimize interference between pods that are scheduled on the same machine, giving each user a high-quality experience even when other users are running heavy workloads.

The following diagram is a high-level representation of what a typical Serverless cluster looks like: 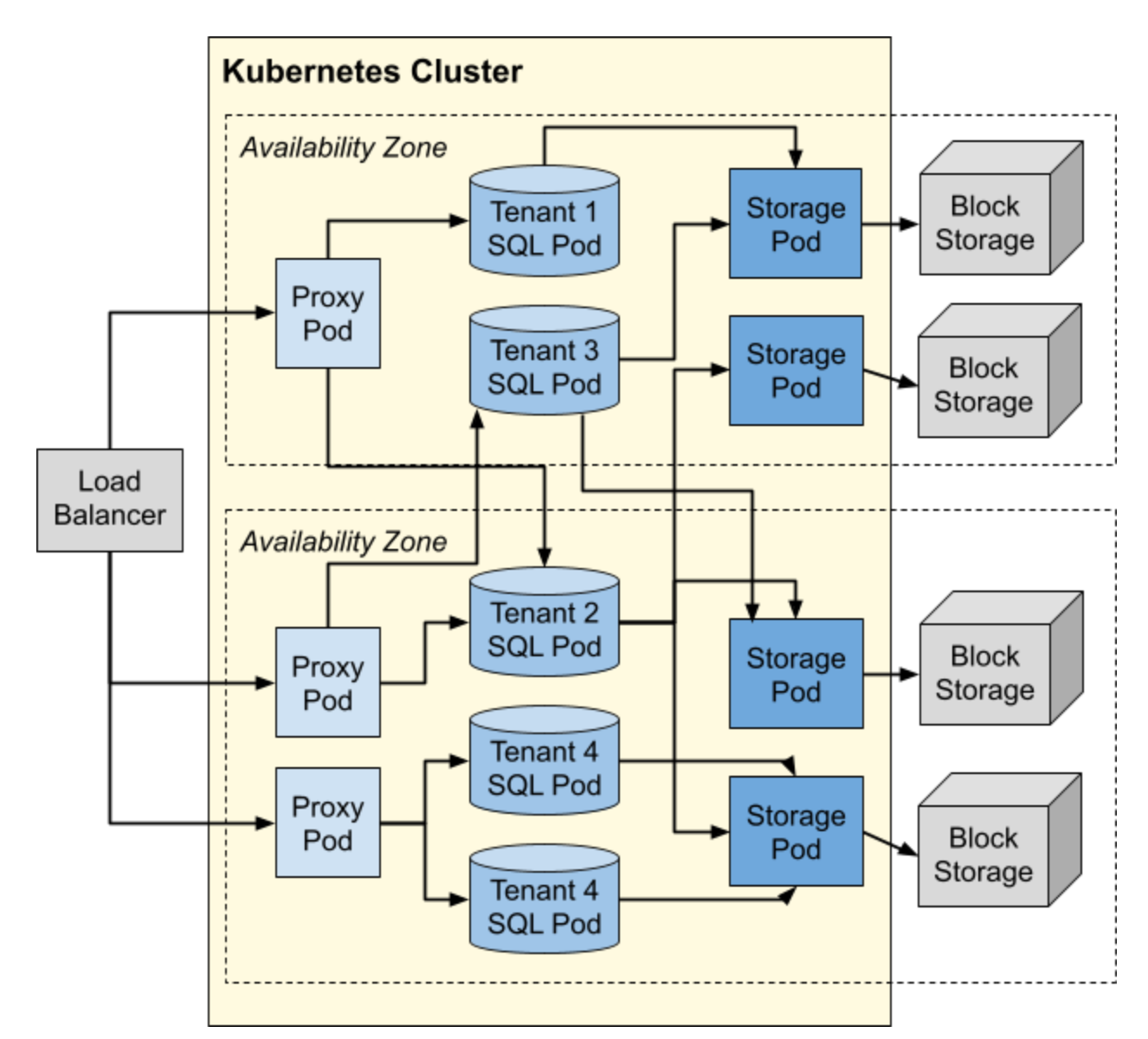 Proxy pods allow many users to share the same IP address, balance loads across a user's available SQL pods, and automatically resume clusters that have been paused due to inactivity. They also detect and respond to suspected abuse of the service.

Finally, the SQL pods communicate with the KV layer to access data managed by the shared storage pods, each of which stores that data in an AWS or GCP block storage system. 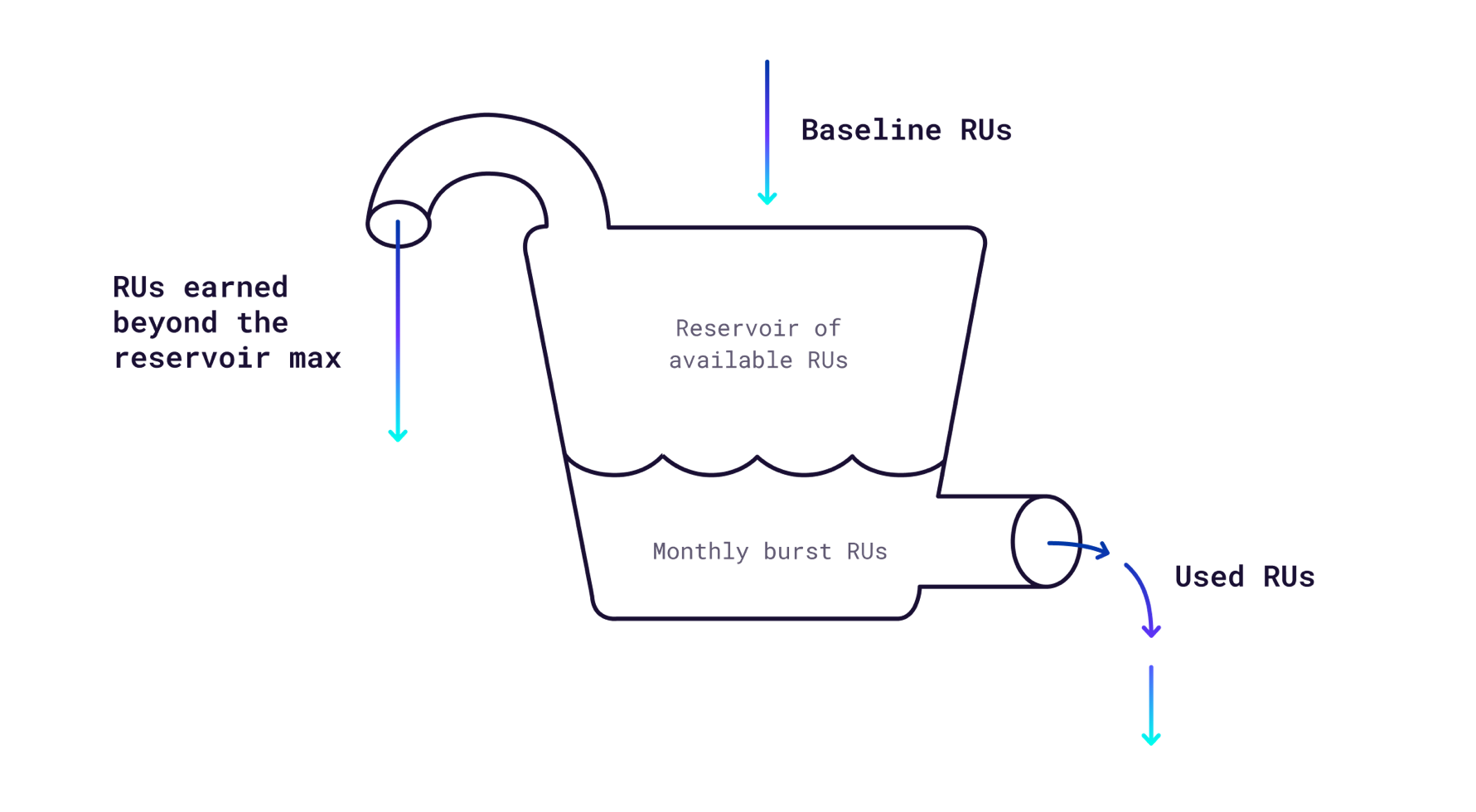 Storage always gets first priority in the budget since you need to be able to store your data first and foremost. The remainder of the budget is allocated to burst performance. You can theoretically reach your spend limit on burst performance in the first few minutes of a cluster being created. If this happens, the cluster will be throttled back to the baseline performance and can reaccumulate burst capacity by using fewer RUs.

Serverless clusters also have the ability to scale to zero and consume no compute resources when there are no active queries. When there are no active queries, you will pay for the storage your app is using, but not for Request Units. To avoid wasted resources, CockroachDB Cloud automatically pauses Serverless clusters that are inactive, which is defined by having no connection to the cluster for five consecutive minutes. Once the user attempts to reconnect to the cluster, the cluster will automatically resume. Pausing, resuming, and scaling clusters is a fully-managed process and will not disrupt or affect the user experience. However, it is important for your application to have connection retry logic in the event of node restarts or network disruptions. For more information, see the Production Checklist.

The diagrams below shows how CockroachDB Serverless (beta) autoscales with your application's traffic: 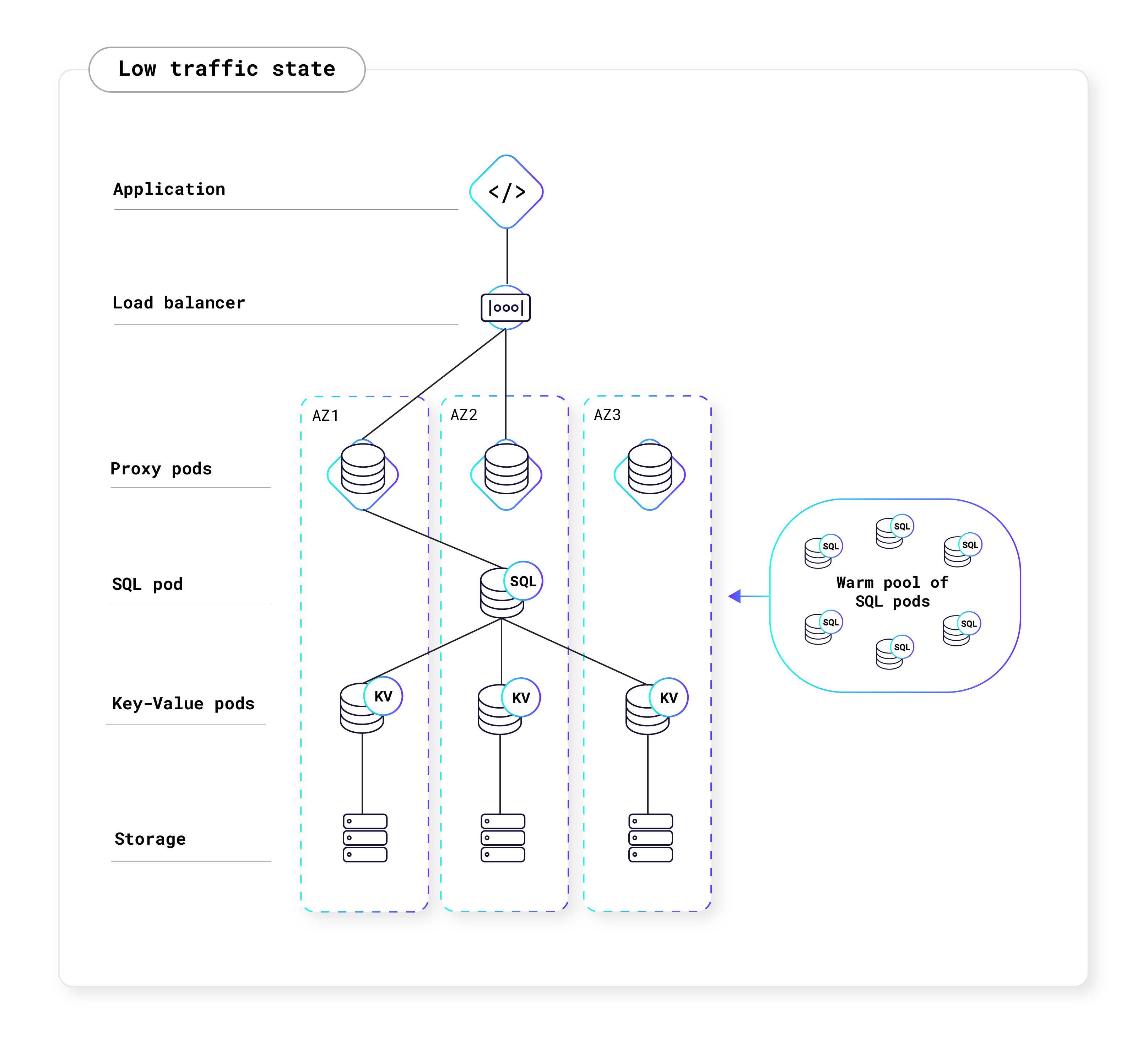 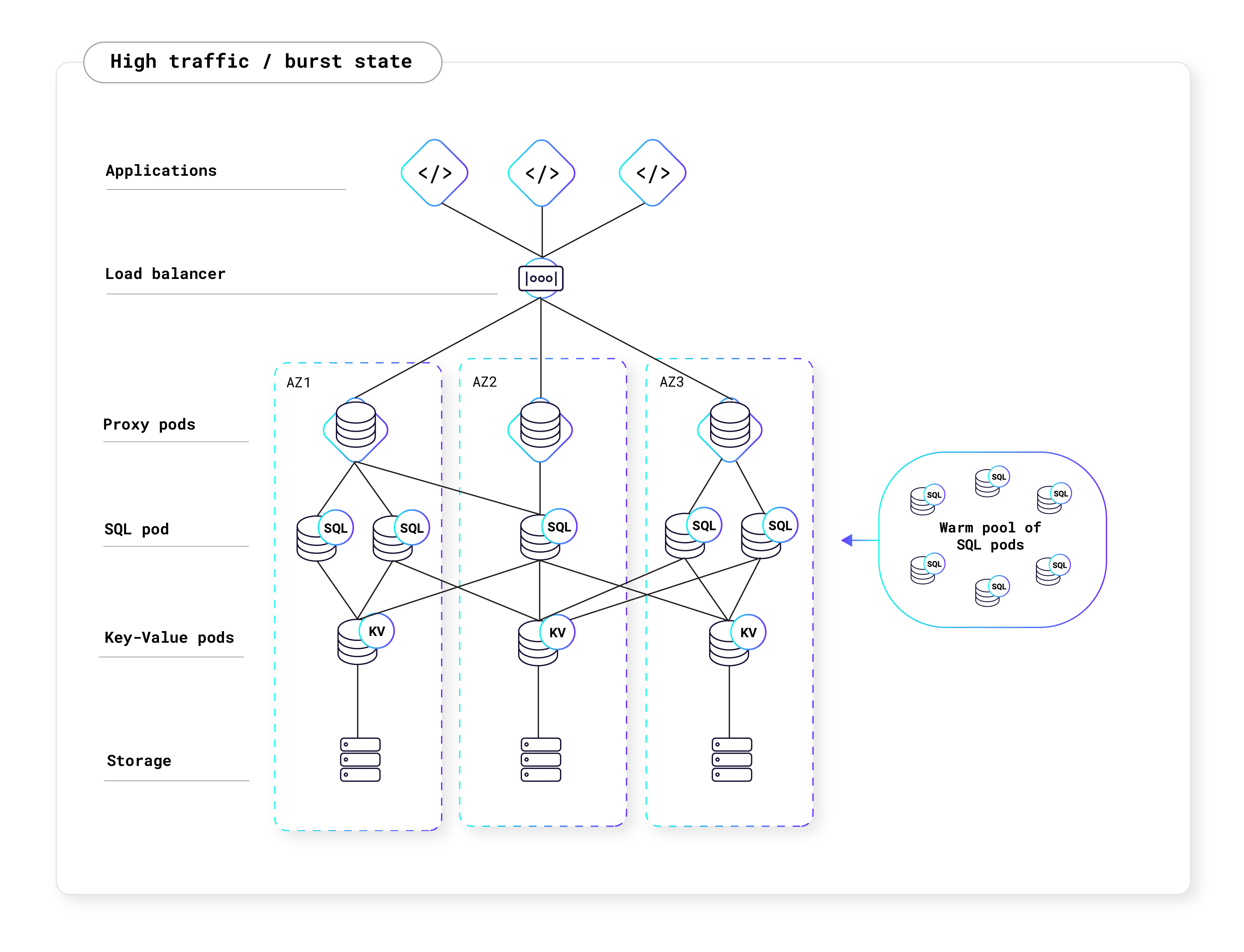