Editor's Note: This post was originally authored when CockroachDB was pre-1.0. CockroachDB's architecture has undergone many changes since then. One of the most significant, as it relates to this post which focuses on our previous "lockless" design, is that we now use more locking and lock-like structures to provide SERIALIZABLE isolation. For more current details about CockroachDB's transaction model, read our transaction layer architecture documentation.

Several months ago, I discussed how CockroachDB’s distributed transactions are executed atomically. However, that discussion was incomplete; it ignored the concept of concurrency, where multiple transactions are active on the same data set at the same time. CockroachDB, like all database systems, tries to allow as much concurrency as possible in order to maximize access to the data set.

Unfortunately, our atomicity guarantee is not sufficient to keep the database consistent in a world of concurrent transactions. Recall that guarantee:

To protect against these anomalies, we require an Isolation guarantee:

For a group of atomic, concurrent transactions, the commit of one transaction may not interleave with the operations of another transaction.

Perfect isolation can be trivially achieved through serial execution: executing all transactions on the system one at a time, with no concurrency. This has terrible performance implications; fortunately, it is also unnecessary to achieve perfect isolation. Many concurrent databases, including CockroachDB, instead offer serializable execution, which is equivalent to serial execution while allowing a considerable level of concurrent transactions.

CockroachDB uses a multi-version timestamp ordering to guarantee that its complete transaction commit history is serializable. The basic technique has been textbook material for three decades, but we will briefly go over how it works:

To demonstrate the correctness of timestamp ordering, we look to serializability theory, and specifically one of its core concepts, the serializability graph. This graph is used to analyze a history of database transactions in terms of operation conflicts.

In the theory, a conflict occurs when two different transactions perform an operation on the same piece of data (one after the other), where at least one of the operations is a write. The second operation is said to be in conflict with the first operation. There are three types of conflicts:

For any given transaction history, these conflicts can be used to create a serializability graph, which is a directed graph linking all transactions.

Figure 1: Example of a serializability graph for a simple transaction history.

And we now arrive at a key statement of this theory: a history is guaranteed to be serializable if (and only if) its serializability graph is acyclic.  (Proof, for those interested).

Figure 2: Example of a transaction history with a cyclic serializability graph. This history is not serializable.

CockroachDB’s timestamp ordering guarantees an acyclic serializability graph, and this is straightforward to demonstrate:

By disallowing any conflicts that flow against the timestamp-ordered direction, cyclic serializability graphs are impossible. However, let’s explore in detail how CockroachDB actually goes about detecting and disallowing these conflicts.

This is where the “multi-version” aspect of our control mechanism comes into play. CockroachDB keys do not store a single value, but rather store multiple timestamped versions of that value. New writes do not overwrite old values, but rather create a new version with a later timestamp.

Read operations on a key return the most recent version with a lower timestamp than the operation: 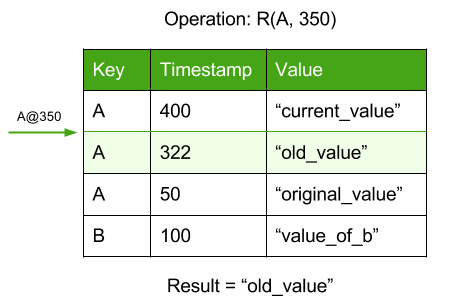 Thus, it is not possible in CockroachDB to form WR conflicts with later transactions; read operations will never read a value with a later timestamp.

The timestamp cache is an interval cache, meaning that its keys are actually key ranges. If a read operation is actually a predicate operating over a range of keys (such as a scan), then the entire scanned key range is written to the timestamp cache. This prevents RW conflicts where the key being written was not present during the scan operation.

By choosing a timestamp-based ordering, and rejecting all conflicts which disagree with that ordering, CockroachDB’s Serializable Snapshot guarantees a serializable schedule.

While the previous conflict rules are sufficient to guarantee a serializable history, a different concern arises when two uncommitted transactions have a conflict: even if that conflict is allowed by our timestamp ordering rules, additional rules are required to ensure that the transaction schedule remains recoverable.

The issue of can be explained with an example:

This conflict is allowed according to our timestamp ordering rules. However, what value should T2’s read retrieve from ‘A’?

Thus, neither possibility can allowed: in this situation, there is no way that T2 can be safely committed before T1 while maintaining a recoverable schedule.

As established in our atomicity post, uncommitted data is staged in intents on each key, for the purpose of atomic commits. In an MVCC data store, the intent on a key (if present) is stored in a special value which sorts immediately before the most recent committed value: 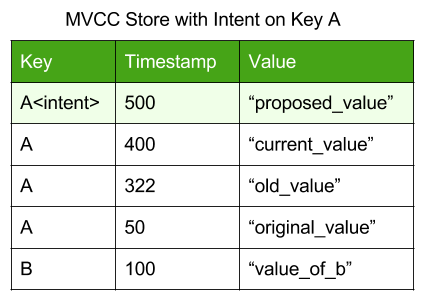 In our previous post on atomicity, we assumed that any intent encountered by a transaction was the result of an abandoned transaction; however, in a concurrent environment, the intent might instead be from a concurrent transaction which is still running.

Strict scheduling actions are required in two situations: if a read operation encounters an intent with a lower timestamp, or if a write encounters any intent from another transaction (regardless of timestamp ordering). In these situations, there are two options available to CockroachDB:

As an optimistic system (no waiting), CockroachDB always chooses to abort one of the transactions. The process of determining which transaction is as follows:

In this way, all conflicts between uncommitted transactions are immediately resolved by aborting one of the transactions, thus enforcing strict scheduling and guaranteeing that all transaction histories are recoverable.

We have now demonstrated how CockroachDB’s Isolation system is able to provide a serializable and recoverable transaction history in a completely distributed fashion. Combined with our atomic commit post, we have already described a fairly robust system for executing concurrent, distributed ACID transactions. That said, there are still many aspects to CockroachDB’s transaction system that we have not yet covered.

For example, CockroachDB offers another, more relaxed isolation level known as Snapshot (without the “serializable”). Like relaxed isolation levels in other database systems, this mode increases concurrency performance by allowing transactions to interleave in certain cases; for some applications, this is an acceptable tradeoff.

Another aspect is how CockroachDB provides linearizable access to its data. Linearizability is a property that can be difficult to provide in a distributed system. Spencer Kimball has already written this blog post demonstrating how CockroachDB deals with this in some detail (contrasting it with the way a similar system, Google’s Spanner, does the same); however, we may eventually write an additional linearizability blog post focused more directly on our transaction system.

Stay tuned, and please let us know if any of these potential topics are of particular interest.

And if distributed transactions are your jam, check out our open positions here.