Since this post was originally published in 2017, StatefulSets have become common and allow a wide array of stateful workloads to run on Kubernetes. In this post,  we’ll quickly walk through the history of StatefulSets, and how they fit with CockroachDB and Kubernetes, before jumping into a tutorial for running CockroachDB on Kubernetes.

Managing resilience, scale, and ease of operations in a containerized world is largely what Kubernetes is all about—and one of the reasons platform adoption has doubled since 2017.  And as container orchestration continues to become a dominant DevOps paradigm, the ecosystem has continued to mature with better tools for replication, management, and monitoring of our workloads.

And as Kubernetes grows, so does CockroachDB as we’ve recently simplified some of the day 2 operations associated with our distributed database with our Kubernetes Operator.  Ultimately, however, our overall goal in the cloud-native community is singular: ease the deployment of stateful workloads on Kubernetes.

CockroachDB helps solve for stateful, database-dependent applications through replication of data across independent database nodes in a way that will survive any failure (just in case our name didn’t make total sense).  CockroachDB, combined with Kubernetes’ built-in scale out, survivability and replication strategies, can give you the speed and simplicity of orchestration without sacrificing the high availability and correctness you expect from critical stateful databases.

How do CockroachDB + Kubernetes = Retained State?

While Kubernetes is fairly straightforward for use with stateless services, management and surviving state has been a challenge.

Why?  You can’t simply swap out nodes as they depend on data in pod-mounted storage.  And rolling back doesn’t work for databases either.

Some best practices have evolved to workaround the challenge of deploying data-driven apps on K8s:

To keep up with the demands of modern, data-driven apps, the Kubernetes community developed  a native way to manage state, via StatefulSets.

StatefulSets are ideal for CockroachDB because the UID means it doesn’t get treated as a new node in a Kubernetes cluster, cutting way back on the amount of data replication required to keep data available.  This is key to efficiently supporting fast distributed transactions and our consensus protocol. For a real life example of a CockroachDB running on Kubernetes to retain state check out this Pure Storage case study.

Step One: Building Your Kubernetes Cluster

The year is 2021.  There are lots of ways to get your Kubernetes cluster up and running.  For this walkthrough we’ll use GKE.  If you’re interested in other paths, we have resources for:

With the Google Cloud CLI installed, create the cluster by running

Just like most Kubernetes deployment configuration work, CockroachDB config is managed by a YAML file like the one below.  We’ve added comments to help provide some context for what’s going on.

You should soon see 3 replicas running in your cluster along with a couple of services. At first, only some of the replicas may show because they haven’t all yet started. This is normal, as StatefulSets create the replicas one-by-one, starting with the first.

If you’re curious to see what’s happening inside the cluster, check the logs for one of the pods by running kubectl logs cockroachdb-0.

If all has gone to plan, you now have a cluster up and running.  Congratulations!

To open a SQL shell within the Kubernetes cluster, you can run a one-off interactive pod like this, using the cockroachdb-public hostname to access the CockroachDB cluster. Kubernetes will then automatically load-balance connections to that hostname across the healthy CockroachDB instances.

To get more information into cluster behavior and health, you can pull up the CockroachDB Console by port-forwarding from your local machine to one of the pods as shown below:

If you want to see information about how the cluster is doing, you can try pulling up the CockroachDB admin UI by port-forwarding from your local machine to one of the pods:

You should now be able to access the admin UI by visiting http://localhost:8080/ in your web browser: 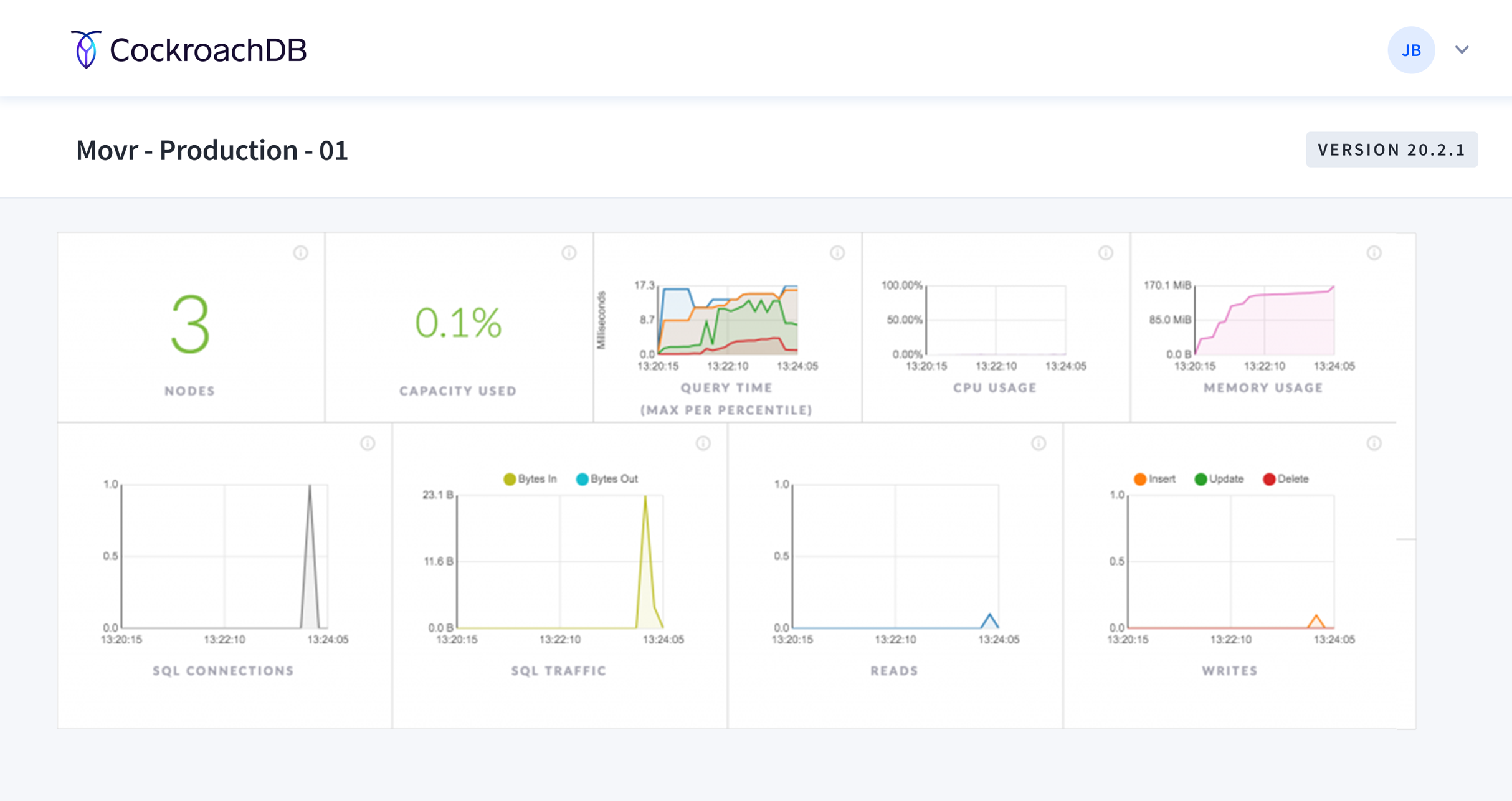 We talked about DB survivability earlier.  Now you can test it for yourself.  What happens when a pod goes bad or gets deleted?

The container will now be recreated for you by the StatefulSet controller, just as it would happen in the event of a real production failure.

If you’re up for testing the durability of the cluster data, you can try deleting all the pods at once and ensuring they start up properly again from their persistent volumes. To do this, you can run kubectl delete pod –selector app=cockroachdb, which deletes all pods that have the label app=cockroachdb.  This includes the pods from our StatefulSet.

Just like during setup, it might take some time for them all to come back up again. But once they are up and running again, you’ll be able to get the same data back from the SQL queries you’re making in the shell.

Before removing nodes from your cluster, you must first tell CockroachDB to decommission them. (This lets nodes finish in-flight requests, rejects any new requests, and transfer all range replicas and range leases off the nodes.

Now that the nodes are decommissioned you can scale your Kubernetes cluster by simply adding or subtracting replicas by resizing the StatefulSet as shown below:

Once you’re done, a single command will clean up all the resources we’ve created during our oh-so-brief Kubernetes tutorial. The labels we added to the resources do all the work.

You can also shut down your entire Kubernetes cluster by running:

Where to go from here

Now that you’ve mastered the basics, what next?

More information and up-to-date configuration files for running CockroachDB on Kubernetes can be found in our documentation.