Vlad Sydorenko, a senior software engineer at Netflix, stood up in the audience and asked for the microphone: “When you were migrating from Aurora to CockroachDB how did you make sure there was no data loss between the clusters?” On stage, two DoorDash engineers leapt into an explanation…

This was an ordinary moment for RoachFest (#roachfest22), the first-ever CockroachDB customer conference, but it’s an extraordinary example of what made this conference a valuable experience for CockroachDB users.

Want to know why DoorDash chose CockroachDB as their internal database of choice over AWS Aurora? Or how Hard Rock Digital optimizes performance? Or how the DevSisters game Cookie Run: Kingdom survived a mass virality and subsequent success disasters? How about hearing audience questions about primary keys, schema changes, version upgrades, how to get data out of CockroachDB, and when to use AS OF SYSTEM TIME?

All of the talks from RoachFest are now available for your binge-watching pleasure. Here are a few notable themes that came up over the course of the event:

Spencer Kimball, CEO of Cockroach Labs, kicked off the event with an evocative keynote about the current and future state of CockroachDB. It will come as no surprise that his focus was on abstracting away the complexity of the infrastructure from developers.

“We have to shift from doing things manually, with a team of SREs (if you can even manage to hire them). We have to make it possible for you to be able to manage operations  programmatically. Scale programmatically. And provide an arbitrary level of granularity and control. " - Spencer Kimball, CEO & Co-Founder Cockroach Labs

The as-a-service theme came up again and again in presentations from Netflix, JPMorgan Chase, Starburst Data, and others. Many CockroachDB users provide CockroachDB as a service for their internal engineering teams, with the goal of offering a scalable, transactional database without adding operational burden. 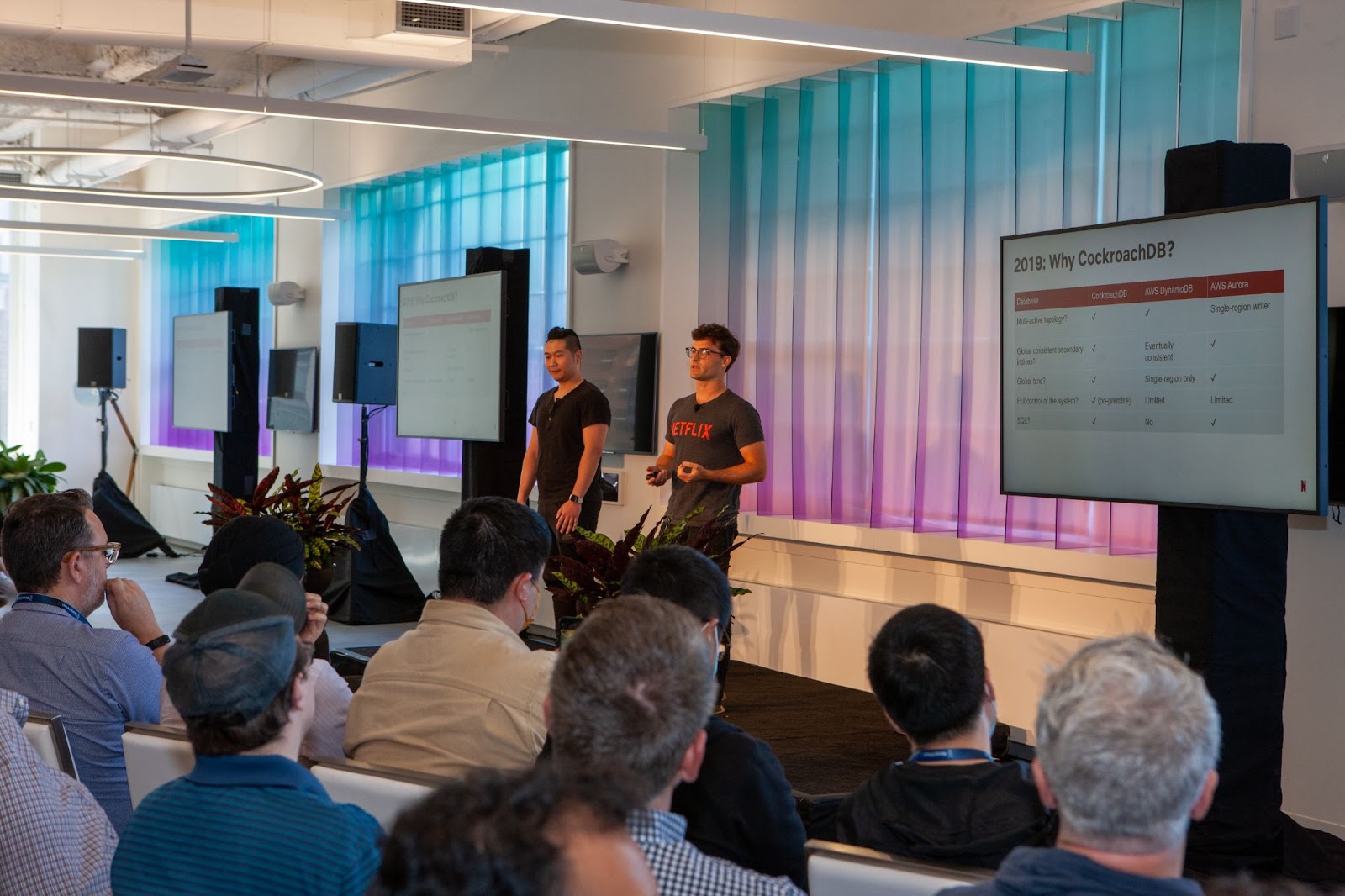 Each company is addressing this challenge in a unique way based on their priority use cases and their in-house expertise, and were hungry to hear how others were educating their teams about the nuances of a distributed system.

CockroachDB is wire and API compatible with Postgres which allows developers to hit the ground running with the database. Many of the presentations covered:

One of the lessons the engineers from DevSisters imparted was to “be very careful with your primary keys so that you know how to detect hot ranges before you go into production.” This same topic came up again in talks given by Hard Rock Digital, Authzed, Nightfall, Netflix, and Shipt. Speakers were eager to share what they’d learned as they moved from systems like Postgres or Cassandra. 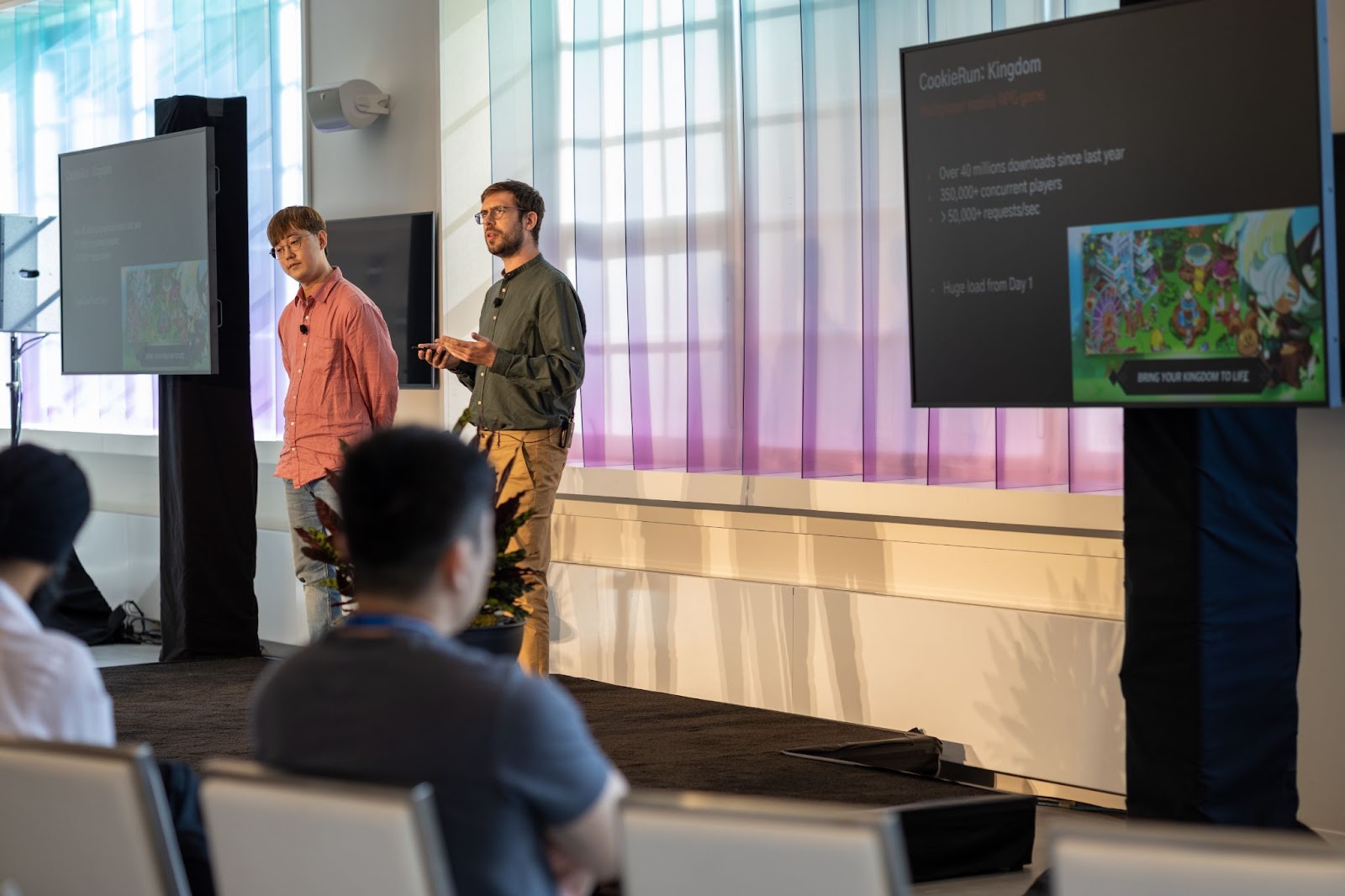 Resources like Cockroach University and the CockroachDB docs are great for getting comfortable with a distributed database. And there is also a vast collection of support resources that are intended to grow with you from startup to IPO.

CockroachDB support does not simply exist to make sure the database is deployed correctly. The goal of CockroachDB support is to help our community make good decisions about how to use distributed data to fundamentally deliver a better application.

To get involved in the community, join the CockroachDB slack and check out the forum. To find more support, check out our full suite of support resources.

“Set locality. It will save your career one day."

“If someone at Cockroach Labs says I’m wrong about something, they’re probably right."

“I can’t talk about CockroachDB in front of my wife cause she’s scared of roaches.”

"Row-level TTL is awesome for when you stop caring."

Taking place September 20 & 21, 2022, at our headquarters in New York City, RoachFest gathered together data innovators and engineering experts from around the world. DoorDash engineering manager Karthik Katooru, Shipt engineer Michael Ching, and CockroachDB engineering manager Rebecca Taft, PhD (MIT) all presented to a standing-room-only crowd in the heart of NYC.

The two-day event was jam-packed with talks from Twitter, Hard Rock Digital, and Starburst Data to inspire and educate the CockroachDB community. Attendees heard firsthand how CockroachDB is used inside major tech organizations, seasoned fintech companies, sports betting apps, and video games. And after day 1, our partners at Google Cloud, AWS, and Red Hat hosted spirited rounds of ping pong at the RoachFest after-party.

You can find all the talks from RoachFest here.

Watch all the presentations from RoachFest 2022!

Dan has been producing technical blogs, videos, whitepapers, and webinars at Cockroach Labs for the last 4+ years. His mission is to identify the most pressing problems developers face and to create content to solve them. Outside of work Dan is usually chasing his three year old daughter or cooking something indulgent.

When Friday the 13th, a video game adaptation of the slasher film franchise, first launched, gamers booted it up hoping …

How Netflix builds the infrastructure to stream on every device

The details in this post are based on The Netflix Tech Blog post titled “Towards a Reliable Device Management Platform”. …

How a high-availability database empowers Mux to scale video

It’s the second half of a tense semifinal in the World Cup. England, who haven’t won the tournament in half a century, …