Fueling the Start-up Economy: Crowdfunding on a Transaction-Oriented System

Early stage capital is one of the many financial services sectors experiencing digital disruption. Up and coming startup founders are increasingly turning to online equity crowdfunding platforms instead of pursuing traditional early-stage capital raising methods.

In recent years, equity crowdfunding was established as a reliable and popular mechanism for startups and SMEs to raise capital. However, building an affordable, easy-to-use online platform for companies (and investors) to use is not an easy feat. There are many challenges associated with adhering to data regulations, reaching customers in different regions, and scaling to accommodate growth.

Creating opportunity in the Land Down Under

The Australian Crowd Source Funding (CSF) industry, which commenced in 2018, is nascent but accelerating with approximately 120 successful CSF offers completed, raising approximately $80m across the industry to date, the majority of which have been completed on Melbourne-based platform, Birchal. How did they get there? How do they already own 70% of this market?

Simply put, the founders of Birchal made it their mission to comply with a complex web of regulations and develop a solution that would make the investment process simple and fast for new brands and investors. The companies that showcase their service or product on Birchal have the opportunity to engage with potential new stakeholders and raise money for their business. On the flip side, Birchal makes it easy for investors to support the brands they love. 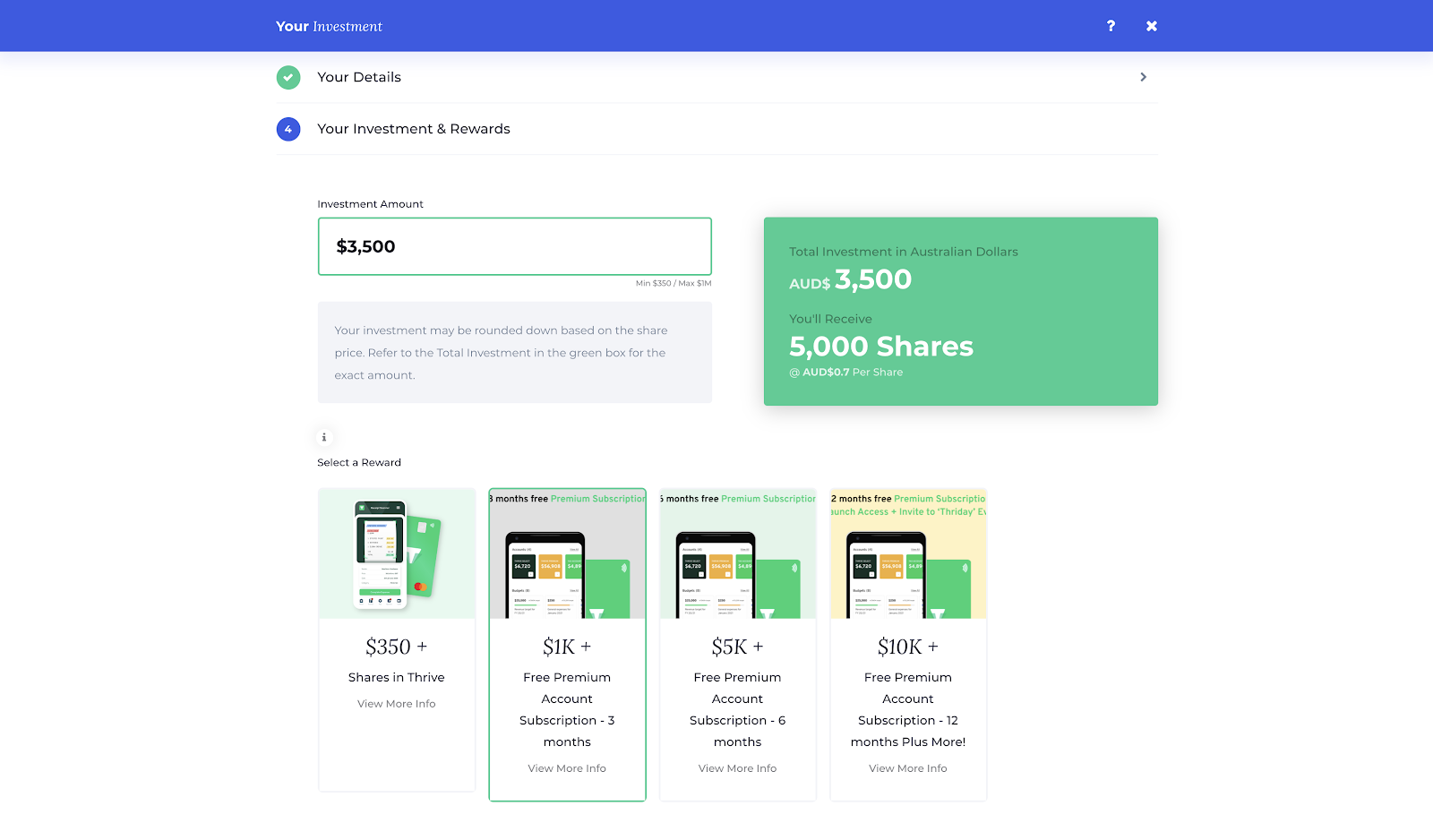 Without the easy-to-use platform that handles the financial transactions for them, Birchal’s customers may have never had the opportunity to raise substantial funds to get their business off the ground.

Before building Australia’s leading crowdfunding platform, the team at Birchal had ambitious goals in mind with several challenges to overcome. Ultimately, they built a scalable and resilient platform on CockroachDB.

Birchal’s co-founders Matt Vitale and Alan Crabbe worked in vastly different areas prior to creating Birchal. Matt was a securities lawyer, with expertise in Australia’s financial services regulatory environment. Alan co-created Pozible.com, a platform that provides the tools and services for creators to plan, draft, and execute crowdfunding campaigns. From this experience, they knew that they would have to combat a lot of legal and regulatory challenges before they could start to build Birchal.

Fortunately, in 2017 the Australian Government introduced crowd-sourced funding (CSF) as a new way for start-ups and small-to-medium-sized companies to raise money from the public to finance their business. Now it was time for Birchal to take off.

The team at Birchal knew that they had to build a unique user interface and seamless experience that would set them apart from other crowdfunding platforms. They saw that a majority of their competition took a really dated approach to investing and charged companies a lot to participate. Instead they wanted to treat each individual company as its own project and showcase the opportunity to the right audience. They knew they could take advantage of predictive analytics and digital advertising to make their platform unique.

They had big plans for Birchal and knew that they would need to build on an infrastructure that could support them in the future.

Birchal CTO, Josh Stewart, has a lot of experience with Postgres and wanted to build Birchal on a reliable, SQL database. However, he also knows that Postgres (and traditional legacy databases in general) is difficult to scale horizontally and he wanted a solution that was architected to be cloud-native from the ground up. Josh and his team briefly evaluated Google Spanner since they are a Google Cloud Provider (GCP) customer. However, Spanner is expensive when it comes to managing large workloads and Birchal was a startup at the time and wanted  to keep overhead low.

Since Birchal’s business model is centered around financial transactions, they wanted a transaction-oriented system that was built to scale for these types of workloads. They thought about pursuing NoSQL options to achieve the scale they needed, but they really wanted to stick with SQL to lower the learning curve for their developers and get the product off the ground quickly. Additionally, guaranteeing consistent transactions was extremely important to them and a lot of NoSQL solutions can only promise eventual consistency.

Ultimately, they needed to create resilient infrastructure so that they could promise their customers that their data is always available to them even during peak investment periods. As they moved to new jurisdictions in the future (in Australia and beyond) they wanted the ability to tie data to a location to achieve low latency access and to meet compliance requirements.

After some searching, Josh came across CockroachDB and saw that on the surface, it met all of his requirements. Plus, it was Postgres-wire compatible. Now it was time to test it for himself.

Back in 2017, Josh and his team got CockroachDB up and running in a day. They were still in the early stages of building their platform so initially they were using CockroachDB Core as a general purpose datastore.

“Coming from Postgres, I’m pleasantly surprised by CockroachDB’s performance. With Postgres, you spend so much time and resources into optimizing production workloads. With CockroachDB, the work is already done.” - Josh Stewart, CTO

The platform started to gain momentum reaching up to ~200 queries a second or ~300 transactions a minute during the peak period of large campaigns.

After 3 years of running a successful platform on CockroachDB Core, Birchal wanted to ensure that their business could infinitely scale in the future. An easy way for them to future-proof their business was to migrate to CockroachDB Dedicated.

The sky’s the limit with CockroachDB Dedicated

Not only did Birchal want to take advantage of CockroachDB Dedicated’s scaling capabilities, but they wanted a managed service that would take care of day-to-day operations for them. Since the CockroachDB Dedicated handles the management for them, they can focus on building their platform instead of investing time and money into maintaining their database. The team was pleasantly surprised with the availability of extra support and enterprise features.

As mentioned before, Birchal uses GCP as their cloud provider. They are set up with 4vCPUs and 3 nodes with the ability to increase up to 5 nodes during periods of increased traffic from popular brand launches.

A majority of their backend services are event driven and built on microservices. They have a bunch of clients that are connected to GraphQL and communicate through that layer. They also have Rest APIs behind GraphQL that communicate directly with CockroachDB Dedicated. 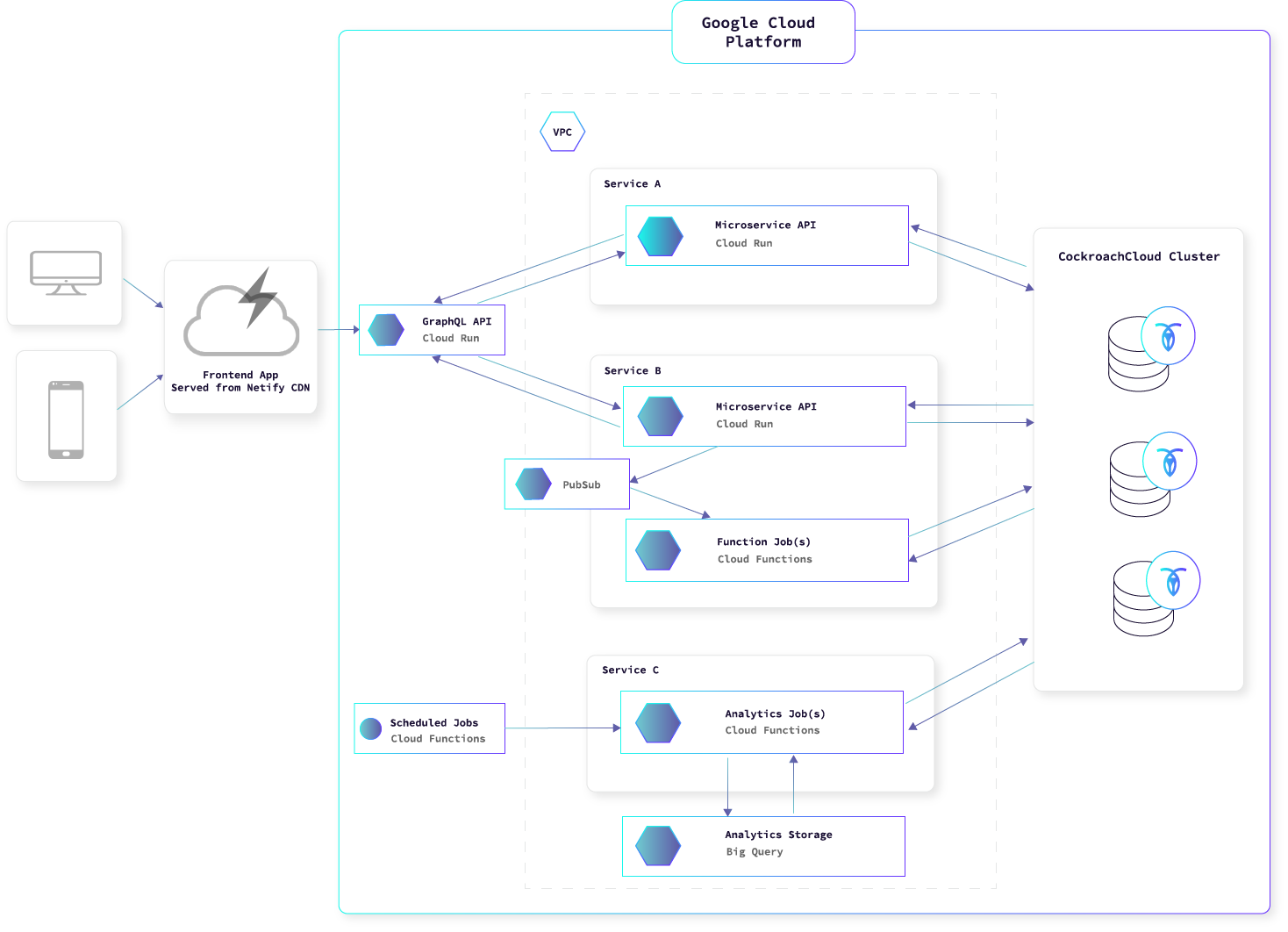 Ultimately the team at Birchal envisions a future where their technology is serverless. They are working hard to create an infrastructure that can manage itself so the team can remain lean and efficient. They trust that CockroachDB Dedicated will be able to work well with a serverless architecture in the future because of its automated scaling features and its ability to function as a SQL API in the cloud. (CockroachDB is already in use at other companies as a scalable, serverless backend for applications).

Putting the fun back in funding

Using CockroachDB, Birchal is able to make informed decisions on future investing behaviors which gives them a competitive edge. For example, they monitor spikes in traffic to predict when a company may raise a large sum of funds. They also analyze past campaign performance to predict how much a certain company may raise. The team is looking into streaming data out of CockroachDB into other data sources so they can run more advanced analytics.

Currently, Birchal owns 70% of the Australian crowdfunding market share. In the future, they will look to expand further into APAC given the key financial services industries located in areas such as Singapore and Southeast Asia.

Birchal’s fresh approach to the world of equity investment is changing the lives of Australian business owners. Built on the foundation of CockroachDB, Birchal demonstrates how finserv companies can leverage best-in-class tech to build one-of-a-kind products.

Interested in building a next-generation platform like Birchal? You should get in touch with our team. Or try out CockroachDB Dedicated yourself for free. If you are interested in learning more, check out what our other customers are building.

Remember when people’s vacuum cleaners and doorbells stopped working because a region of AWS went down? That won’t …

Like many industries, the financial services business is undergoing dramatic change. In response to the whole world …