The 2021 Cloud Report stands on benchmarks. Now in its third year, our report is more precise than ever, capturing an evaluation of Amazon Web Services (AWS), Microsoft Azure (Azure), and Google Cloud Platform (GCP) that tells realistic and universal performance stories on behalf of mission-critical OLTP applications.

Our intention is to help our customers and any builder of OLTP applications understand the performance tradeoffs present within each cloud and within each cloud’s individual machines. Perhaps your current configuration isn’t the most cost effective. Or you are looking to build a net-new application and want to see which provider has the fastest network latency. Maybe storage has been an issue in the past and you are looking for new solutions. Regardless of your motivation, the report is designed to help you achieve your goals and develop the best architecture for your specific needs.

The 2021 Cloud Report is developed by a team of dedicated engineers and industry experts at Cockroach Labs. It compares AWS, Azure, and GCP on micro and industry benchmarks that reflect critical OLTP applications and workloads.

This year, we assessed 54 machines and conducted nearly 1,000 benchmark runs to measure:

1. On all things throughput, GCP is king

For the first time in our three years of benchmarking the clouds, GCP delivered the highest amount of raw throughput (tpm) on the derivative TPC-C Benchmark, a simulated measure of the transactional throughput of a retail or ecommerce company. This win is made all the more exciting after GCP’s third place finish in 2020. 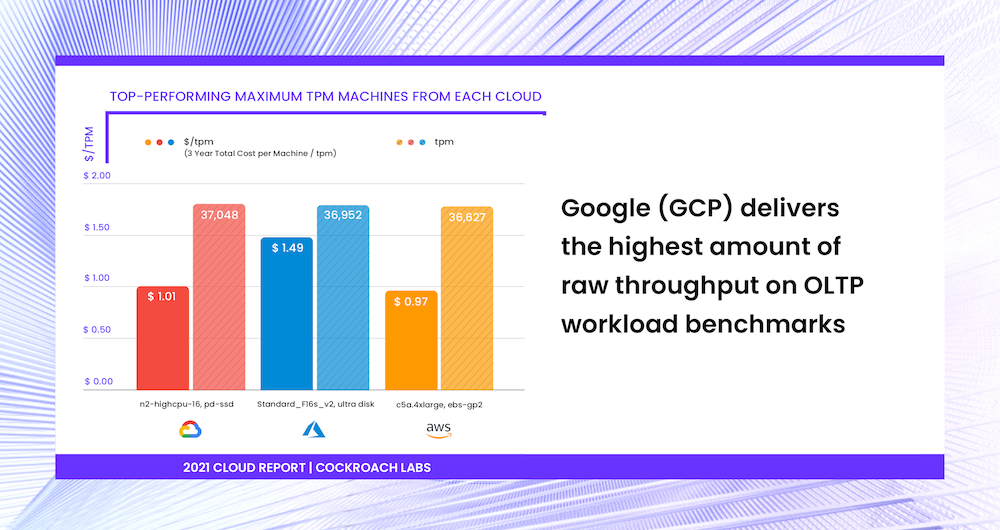 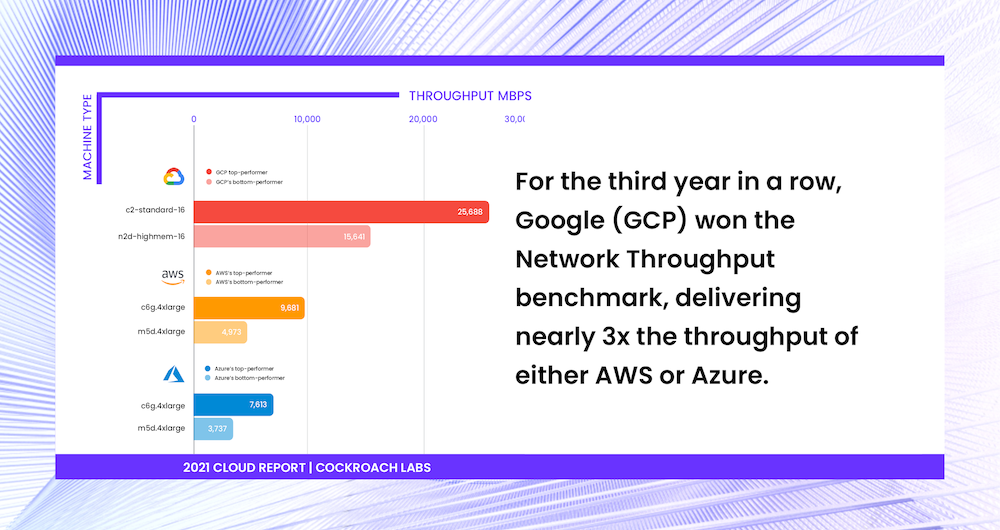 2. Competition for most powerful CPU processor heats up between Intel, AMD, and Amazon’s Graviton2

As we evaluated CPU across each of the machines, it became apparent that what’s inside each machine matters. We evaluated each cloud’s CPU performance using the CoreMark version 1.0 benchmark. CoreMark is open-source, cloud-agnostic, and tests against various real-world workloads like list sort and search. We reported the average number of iterations/second for both the single-core results as well as the 16-core results.

AWS has performed best in network latency for three years running. Their top-performing machine’s 99th percentile network latency was 28% and 37% lower than Azure and GCP, respectively. We do note that when it comes to placement policies, it is important to keep in mind possible randomness in the physical distance between instances and the correlated effects on network latency. 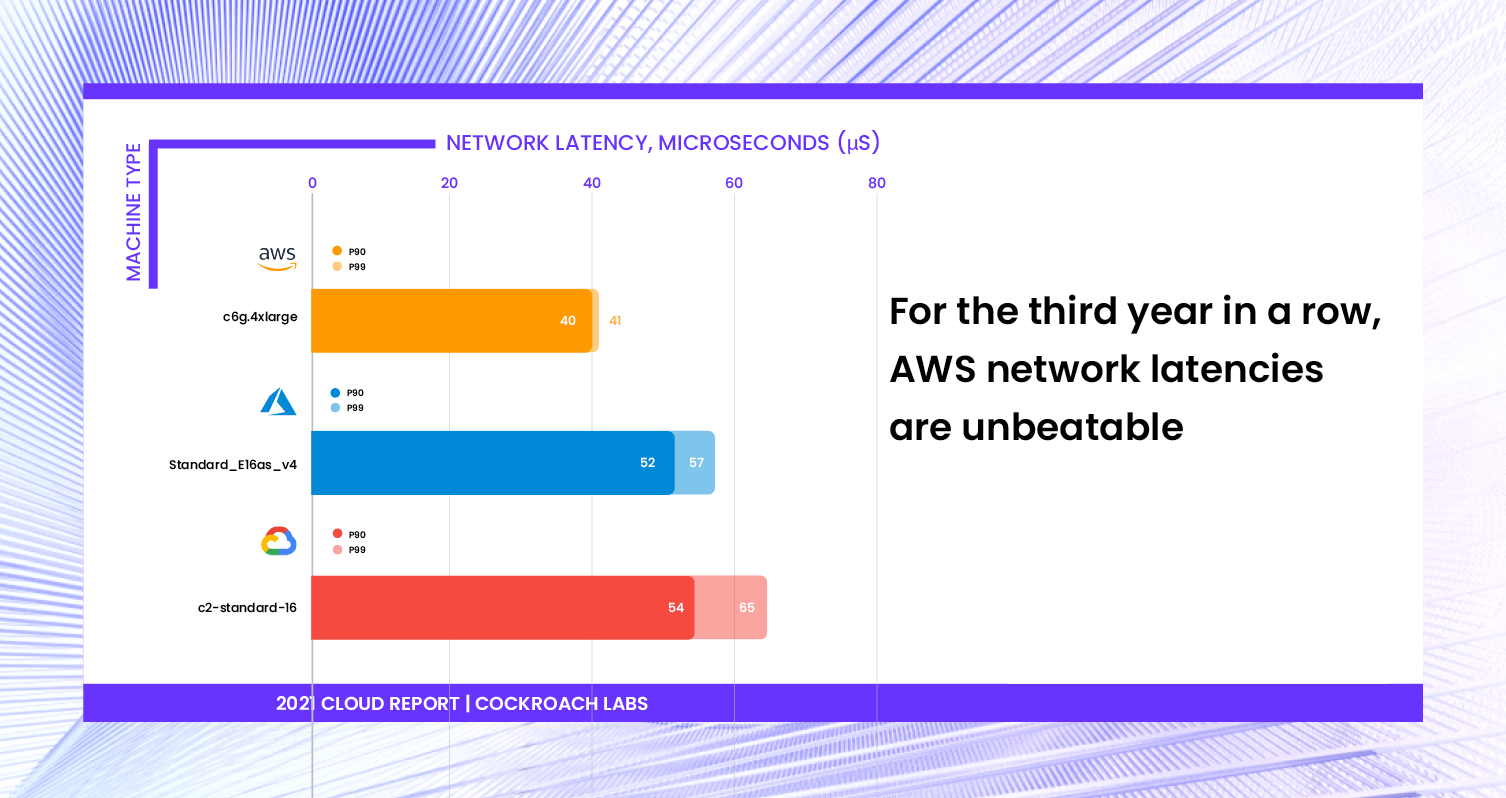 4. When more expensive “advanced” disks are worth the expense

Each of the clouds offers what we designated an “advanced disk” – a more expensive disk for applications and workloads that require higher performance: AWS’s io2, Azure’s ultra disk, and GCP’s extreme-pd.

As in previous years, we have made everything required for reproduction — steps and resources, scripts, configurations, and instructions — available in an open source repository. Our goal is to ensure these resources will always be free and easy to access. We encourage you to review the specific steps used to generate the data in this report.

Note: if you wish to provision nodes exactly the same as we do, use this link to access the source code for Roachprod, our open source provisioning system.

What else is in the report?

The 2021 Cloud Report includes detailed results and analysis, an exhaustive list of individual machine performance, more details on OLTP performance, and the full results of the microbenchmarks for:

Each year there is an overall “winner” of the report based on the cloud’s ranking for each of the respective benchmarks. Download the report to see who was declared this year’s winner, and to better understand how each cloud and its machines performed, on each of the benchmarks.