Learn why CockroachDB wins over Amazon Aurora Download the comparison →

CockroachDB empowers developers to build fast, scalable applications, and one of the ways it does this is by providing rich, Postgres-compatible SQL. And while CockroachDB follows the Postgres wire protocol, the database also has a custom SQL implementation designed for a distributed database.

Over the years, we’ve expanded our distributed SQL implementation to include a cost-based optimizer (CBO) and vectorized execution engine - all built to tackle the complexity of distributed data for developers. In CockroachDB 20.2, we’re excited to provide developers with an increasingly rich SQL feature set that includes support for spatial data, materialized views, Enums, ALTER TABLE, and user-defined schema changes. Let’s dive into the new capabilities.

Applications today need to define expressive data models and be able to continuously evolve them as application requirements change.

CockroachDB now supports the ability to model spatial data which includes both geometric, related to a map, data and geographic, related to the Earth’s surface, data. To read more about combining PostGIS compatible SQL with CockroachDB’s scalability, check out spatial data tutorials or take a look at this distributed spatial data demo.

With 20.2, user-defined schemas are supported in CockroachDB. Developers can use the example below to convert databases with only the default public schema to be user-defined schemas. CockroachDB developers can now implement a data hierarchy similar to what they would use in Postgres. In addition, CockroachDB developers still have the flexibility to execute statements against databases beyond the current connected database with fully qualified names.

Using Enums in a data model provides stronger data integrity and can be combined with Enums available in most programming languages to validate data at both the application and database layer. Stronger data validation allows developers to think about other technical challenges. An Enum defines a list of static values and can be set as a column’s type. Enum columns permit only values in a user-defined set, such as items in a user interface dropdown.

With ALTER TABLE...ALTER COLUMN...TYPE, developers can now change a column’s type. ALTER TABLE...ADD COLUMN...REFERENCES syntax supports adding foreign keys to newly created tables in the same transaction as shown in the example below.

Schema changes are a natural part of the application development lifecycle. The initial schema needs to evolve to support future business needs or to add previously unknown business constraints.

CockroachDB performance improved significantly on real-world OLTP workloads as evident by our TPC-C benchmarking results, the industry standard for OLTP benchmarks. In addition, Cockroach Labs continues to invest in servicing queries that read a lot of data, such as complex joins and aggregations found within transactional workloads.

Using TPC-H queries as representative analytical queries, we saw a decrease in query latency for 20 out of the 22 queries with query 9 latency improving by 80x. 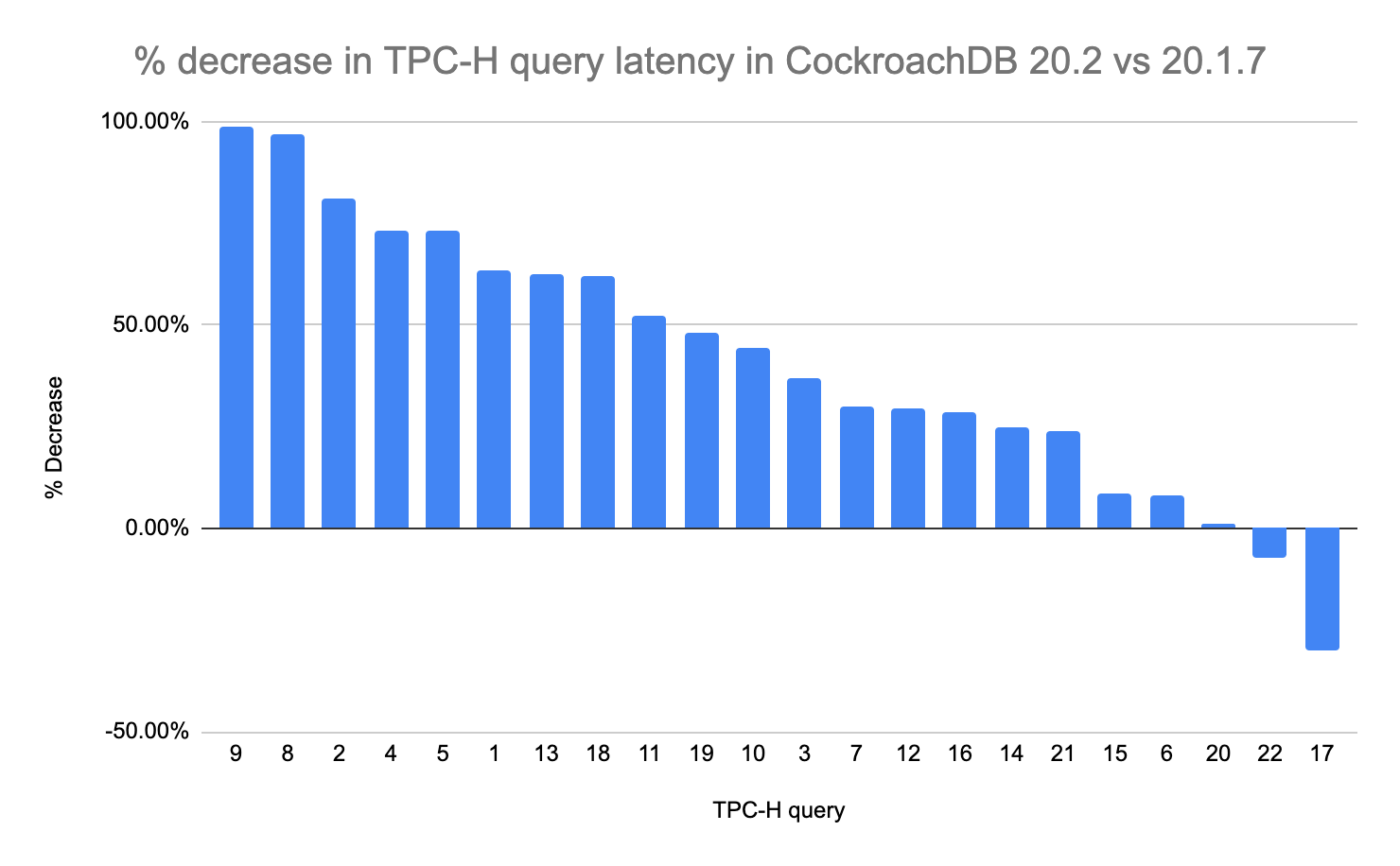 We also improved the performance of lookup join and join reordering, two critical database components whose performance affects many queries. While changes to lookup joins benefitted most TPC-H queries, it negatively affected Query 17 increasing the latency. This highlights the tricky path of optimizing execution across many queries, and Cockroach Labs continues to analyze for new improvements. The join-reordering algorithm is a part of CockroachDB’s cost-based optimizer (CBO), which continues to become more intelligent with every release as our team incorporates field learnings to select the best query execution plan.

With vectorized query execution, better lookup joins, and improved join-reordering, CockroachDB has increased its execution efficiency allowing developers to do more with the same database resources. CBO enhancements mean that queries will have better performance without developers having to understand the complexities of query execution. Instead, developers can focus on their application technical challenges.

For an application, certain query access patterns can be well-defined and only operate against a subset of data. Partial indexes can help optimize these query patterns with a lower impact on write performance compared to full indexes. Since an index is another copy of data, a partial index means that not every write to a table would incur the overhead of updating a full index and stores less data.

Most applications have queries that are critical to their use case or help achieve service-level objectives (SLOs). Once these scenarios have been identified, CockroachDB provides developers with a wide range of strategies including materialized views and partial indexes to help achieve application requirements.

CockroachDB provides developers with the familiar interface of Postgres-compatible SQL against a database that is designed to scale without additional application complexity. Developers can take advantage of the SQL features above to create and alter complex, performant data models. Improvements to our Postgres-compatible SQL reduces overhead for third-party developer tools to add CockroachDB support.

In 20.2, Cockroach Labs was excited to partner with the developer community to add Hibernate and Active Record support. As Cockroach Labs continues to provide developers with more solutions to their problems, we are committed to investing in CockroachDB’s CBO, vectorized execution engine, and other internal mechanisms that improve overall database performance.

Check out the power capabilities discussed above by trying out CockroachDB dedicated.

How We Built Scalable Spatial Data & Spatial Indexing in CockroachDB

Support for spatial data and spatial indexing is one of the most requested features in the history of CockroachDB. The …

What’s So Special About Spatial Data?

How is Lyft able to tell you how far away your driver is? How does DoorDash give accurate estimates for the food you …

Databases are evolving. For the past decade, we’ve read thinkpiece after thinkpiece taking firm stances …