Internet of Things (IoT) and microservices-style applications need a database that can handle requirements such as fluctuating number of client connections, unpredictable workloads, and bursty throughputs. Traditional single-node databases handle these requirements by reducing latency to improve throughput. However, for modern distributed databases such as CockroachDB, the optimal approach to handle these requirements is to use multi-row SQL Data Manipulation Language (DML) and parallel processing.

When to Use Multi-Row DML Syntax

The following table shows examples of single-row and multi-row DMLs for INSERT, UPSERT, and DELETE statements. The number of rows specified in the DML is called the “batch size”. Single-row DML always has batch size of 1.

Using multi-row DMLs improves CockroachDB’s throughput dramatically. To understand why, let’s consider the example of a tabulation service, say for financial transactions, voting mechanisms, or ecommerce apps, and see how the service works with CockroachDB.

A tabulation service processes events generated by a fluctuating number of clients and persists the events (that is, saves the events) into a database. Because the rate of event generation is higher than the rate at which the events can be persisted to the database, a mismatch occurs between event generation and persistence. This mismatch can create throughput impedance mismatch (or to put it simply, it can cause throughput bottleneck). In order to compensate for the mismatch, the events are placed in a queue, as shown in Figure 1.

The client retrieves the event from the queue, processes it, and persists it to the database using the basic INSERT DML.

The client then connects to CockroachDB through a gateway process and sends the INSERT DML. If you have followed CockroachDB over the years, you may be familiar with our approach of mapping SQL onto a KV keyspace. The gateway sends the KV request to the node that contains the KV range.

Now let’s assume a heavy impedance mismatch that caused 9 events to be queued up. The client retrieves and processes one event at a time from the queue. The single-row DML inserts nine separate statements as follows: 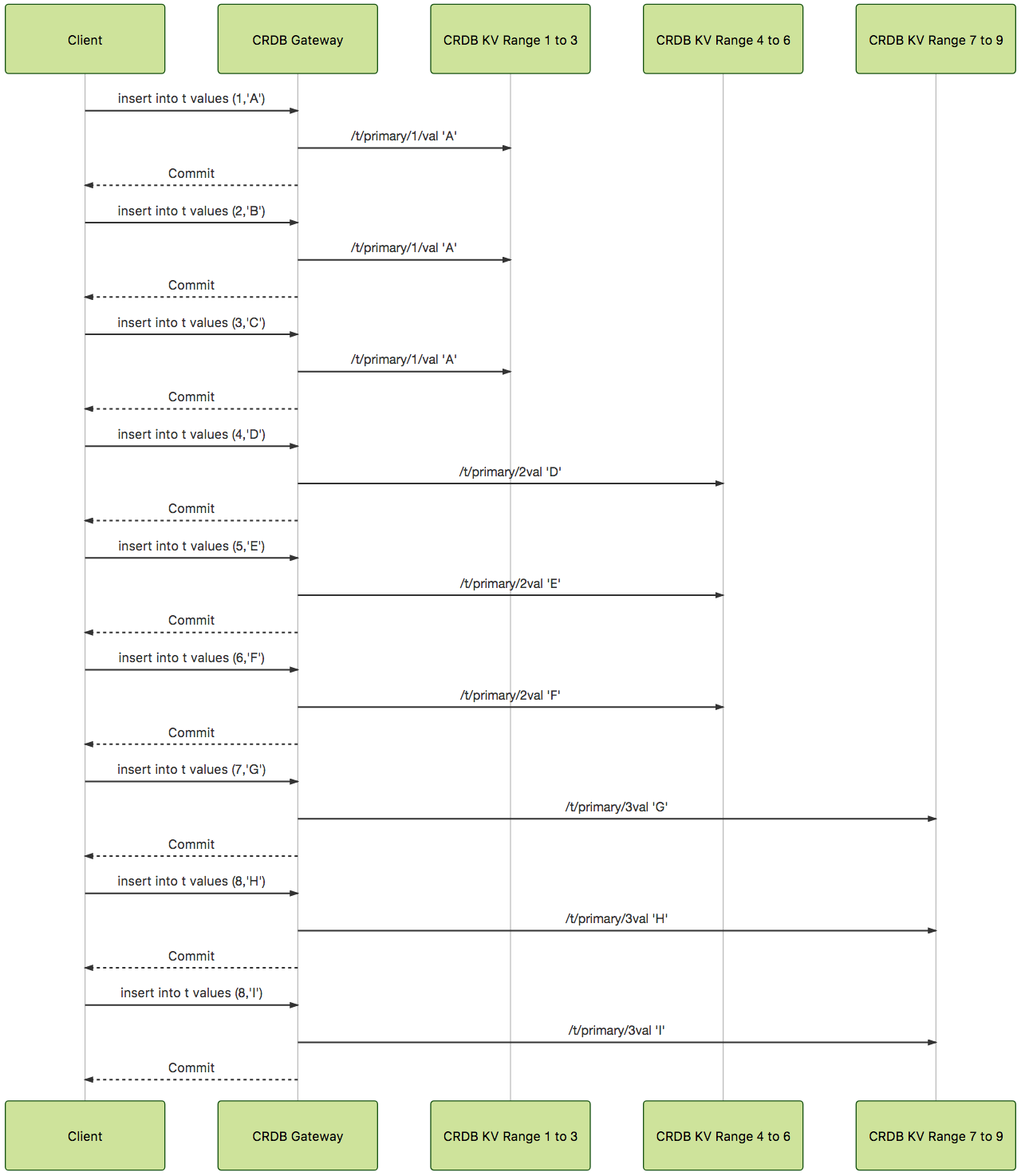 Now let’s consider how the same scenario works with multi-row DML. With multi-row DML, The client retrieves all events from the queue, and inserts the nine values in a single statement as shown below.

The sequence diagram in Figure 3 shows that the initial client-to-gateway communication is the same as the single-row DML. The gateway creates three execution paths based on the three KV nodes. In parallel, each of the KV nodes receives and executes the single statement with three rows. Once the KV nodes complete their operation, the gateway performs the CockroachDB equivalent of a two-phase commit by writing COMMIT intent in the transaction record in the first KV range. As evident from Figures 2 and 3, the multi-row DML shows considerable reduction in execution steps over multiple single-row DMLs.

Let’s compare the number of occurrences for single-row and multi-row execution steps required to insert the 9 events into CockroachDB. 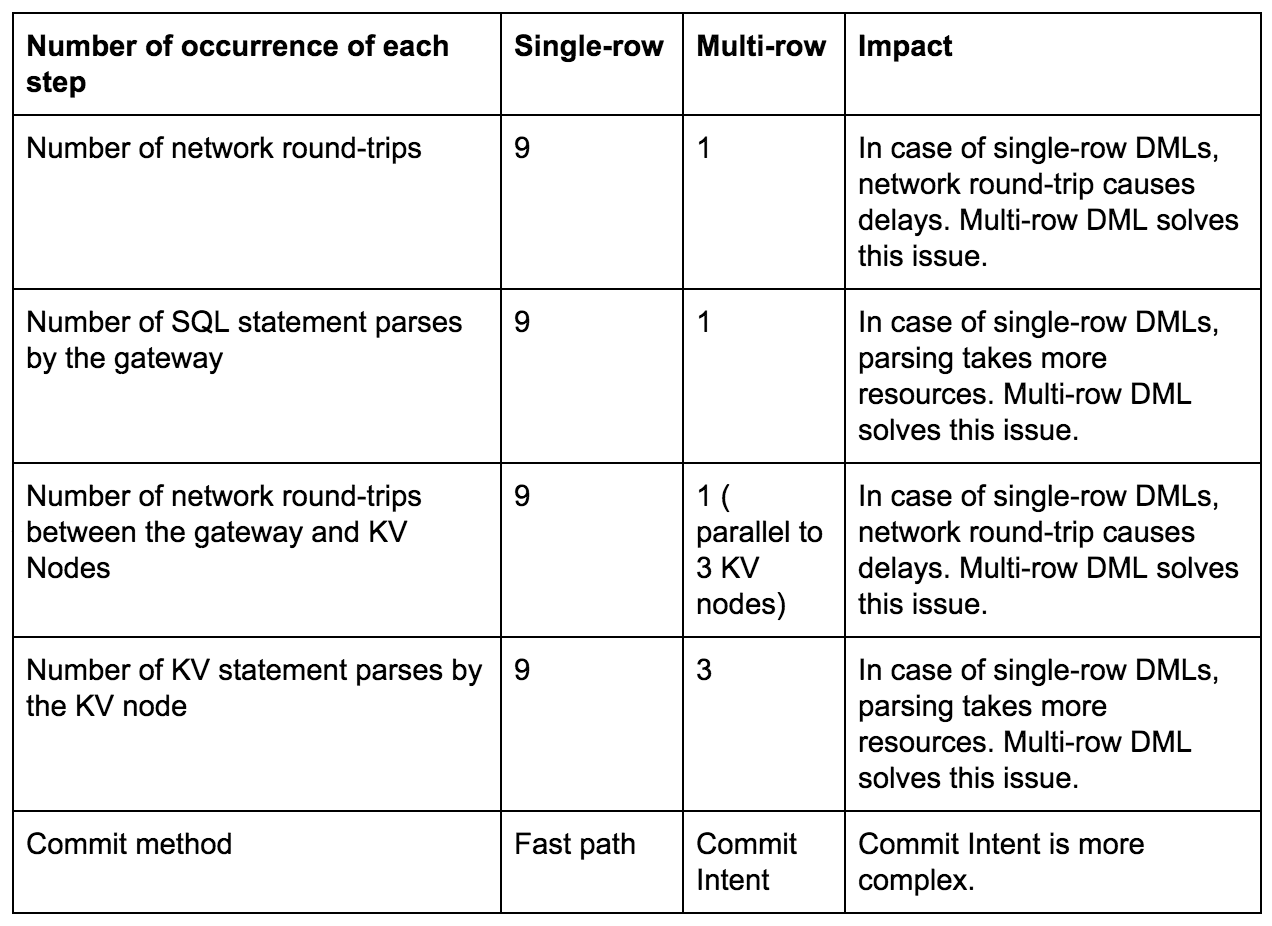 To measure the throughput improvement, we used an open-source load generator called Rand to execute INSERT DMLs into TPC-H lineitem table on a 4-node CockroachDB cluster. The following graph plots relative performance improvement by varying the batch size on the x-axis. The baseline measurement uses a batch size of 1 (single row) with concurrency of 2 -- that is two separate threads running independently. 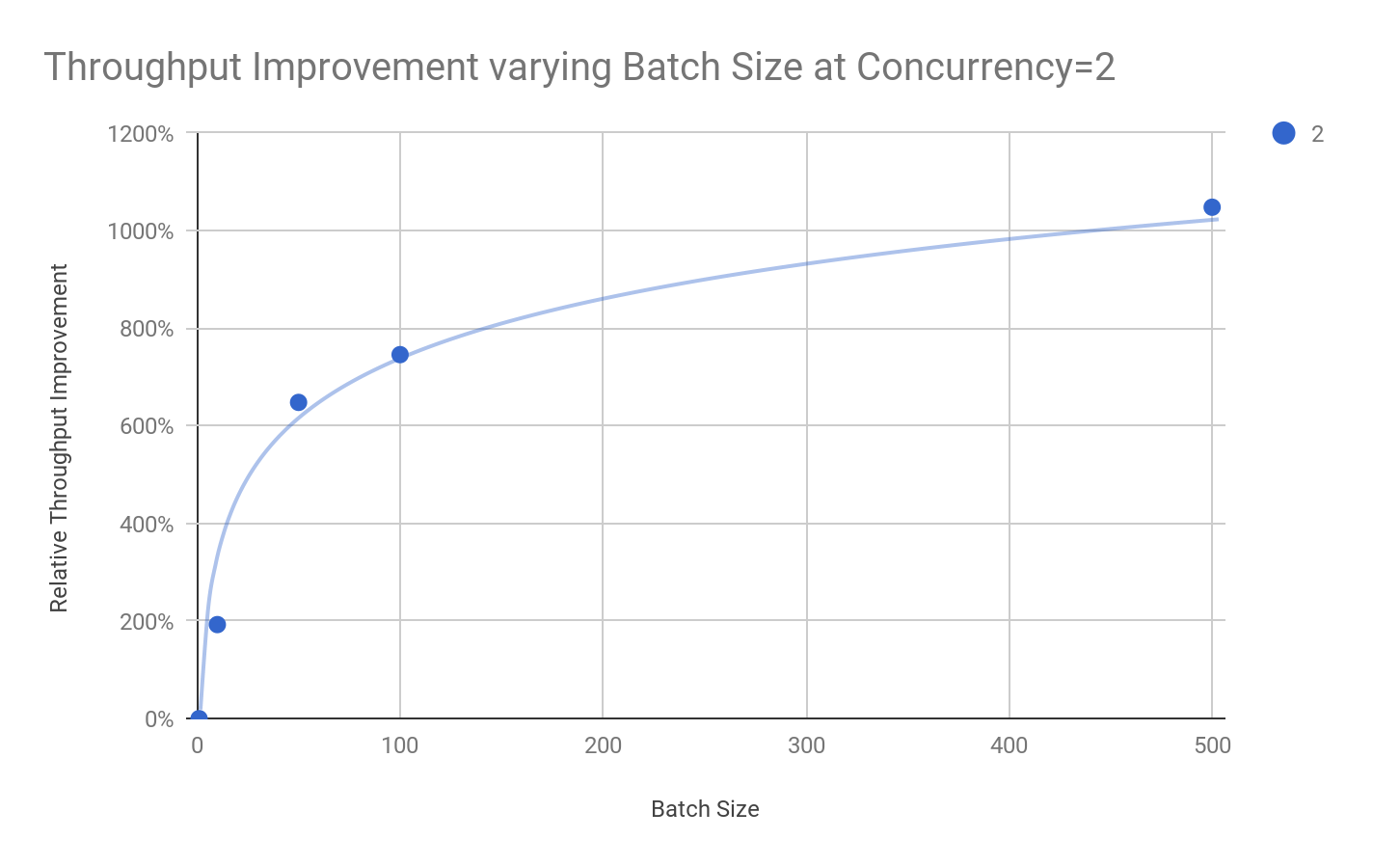 A common practice to improve performance even further is to compound parallelism from application and database levels. But with single-instance databases, the resources are limited, so over-parallelizing can actually decrease performance.

A system can context switch among many parallel workloads, which is normal for regular workloads. But when the system resources are fixed (as is the case with single-node databases) and parallelism is increased beyond the limits, the system will spend more time on the context switch rather than running the workload. The excessive context switch leads to decrease in throughput. Therefore, increasing the application concurrency with database parallelism should move the inflection point to the left on the graph. 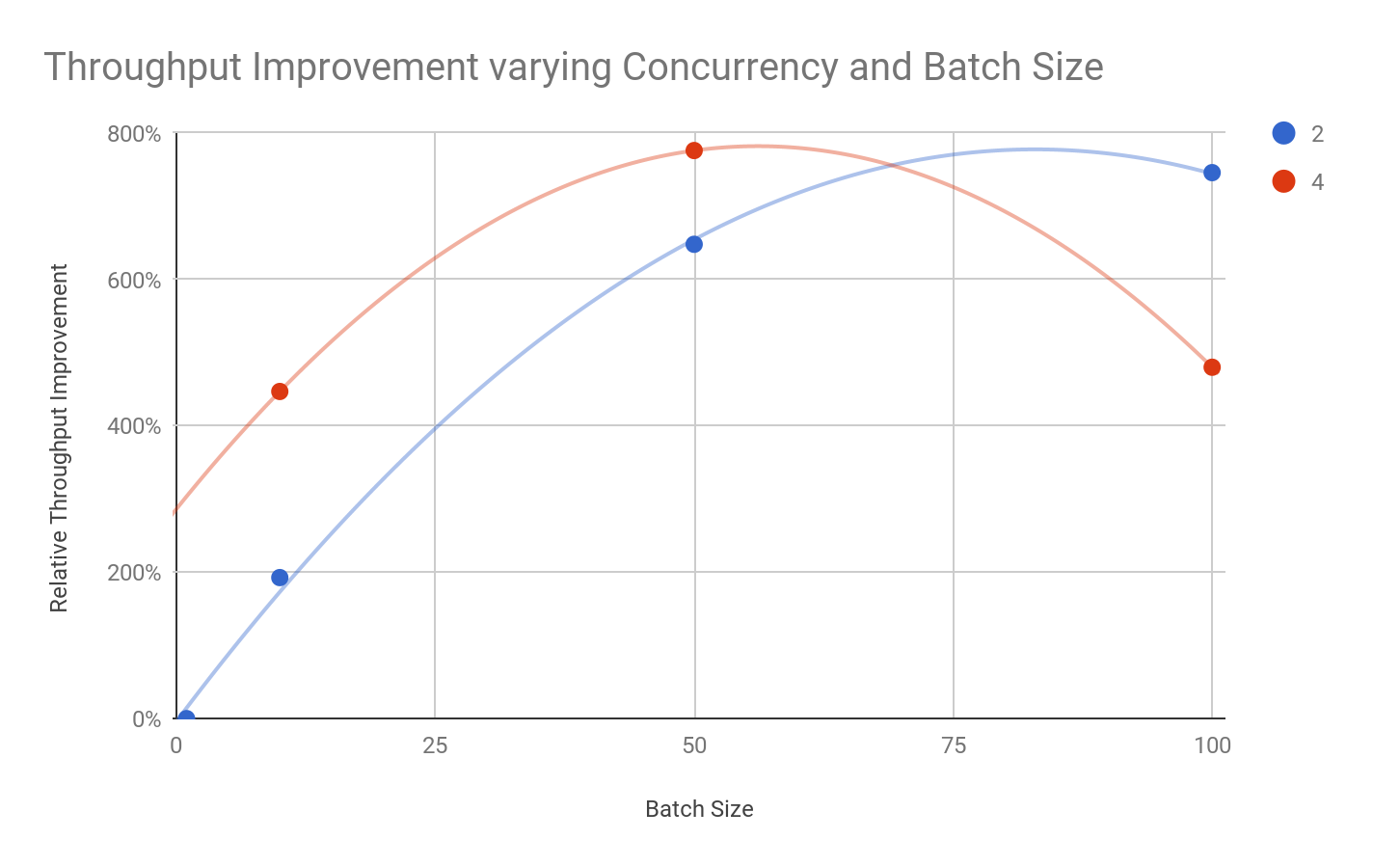 The second test shows that if your database is not scalable, then you need careful upfront planning to avoid over-parallelization. This planning, often called sizing and capacity planning, is complex and time consuming. CockroachDB, on the other hand, is a scalable database that handles the complexity so you don’t have to. It enables your IoT applications and microservices to safely handle unpredictability concurrency.

Multi-row DML improves throughput and reduces resource consumption. CockroachDB automatically parallelizes the multi-row DML processing, and the empirical data that the Rand tool test shows that increasing the batch size results in better throughput. We also saw how databases that are not scalable can face excessive context-switching when aggressive application parallelism is used in combination multirow DML, but because CockroachDB is scalable database, the multi-row DMLs can safely be used to improve throughput. Future blog posts will discuss scalability and its benefits in further detail.