While planning for Hacktoberfest, we asked our community: what holds them back from contributing to open source and how we could help them overcome those obstacles?

The unanimous response holding developers back from contributing to open source was that they wanted us to help curate “beginner-friendly issues.”

So that’s what we did.

We combed through our code and docs repos to identify beginner-friendly first issues. We also created a sample applications repository for folks to contribute CockroachDB apps using a language/framework of their choice. The goal here was to allow contributors to use a technology they were comfortable with while learning a new technology (CockroachDB), and helping our open source project build out our sample apps repo. Win-win!

The project served its purpose: It enabled folks to make their first-ever open source contributions:

Mentored by our Education, SQL, and App Dev teams, the new contributors were able to take their first giant leap into the world of open source, and created some very cool PRs!

Some contributors chose to contribute all 4 PRs required to win the Hacktoberfest to CockroachDB projects: 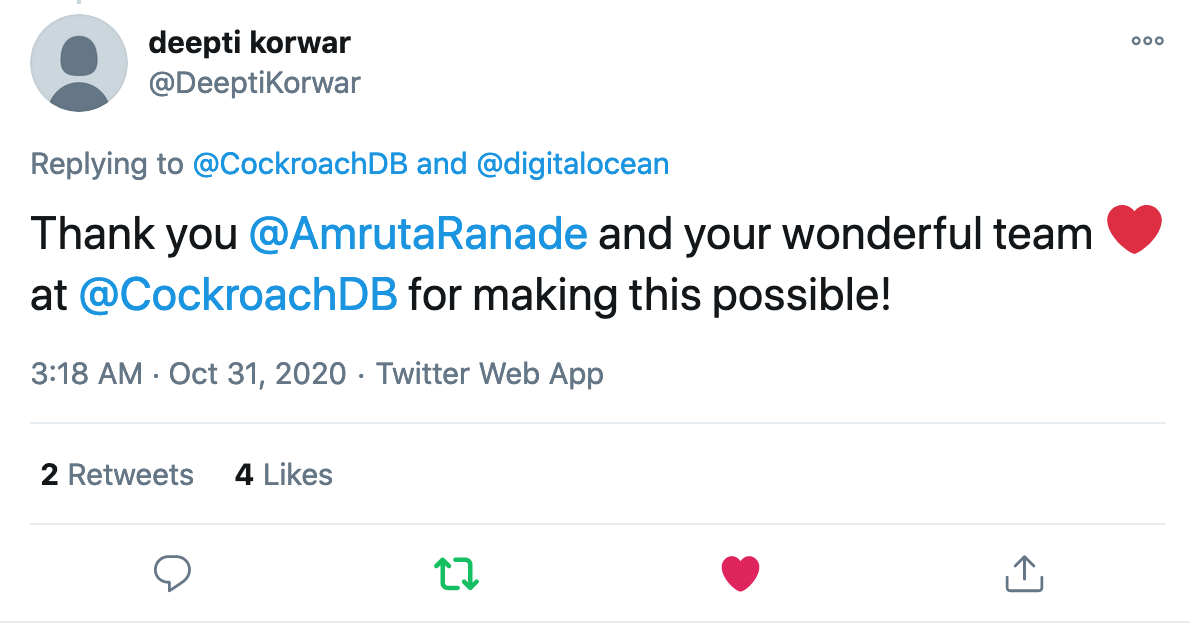 In addition to the open source projects, we also published An Absolute Beginner’s Checklist for Hacktoberfest which proved to be a community favorite.

We had a blast participating in Hacktoberfest and welcoming new contributors into our open source community. Thank you DigitalOcean, Intel, and DEV for organizing the event.

If you wanted to contribute to CockroachDB projects but missed out on Hacktoberfest, you can participate in the next MLH Hackathon and compete for the ‘Best Use of CockroachDB’ prize.

In the meantime, don’t forget to join the fun on our CockroachDB community slack channel.

Cockroach Labs is proud to participate in DigitalOcean’s annual Hacktoberfest, a celebration of open …

We are constantly looking for ways to help small teams make a big impact with CockroachDB. We heard from our community …

Since its inception, CockroachDB has relied on RocksDB as its key-value storage engine. The choice of RocksDB has served …