Reach for the stars: Eliminating data silos for distributed workloads

How Starburst built a multi-region application with CockroachDB to guarantee high availability and low latency access for its customers.

Like many other SaaS companies based on open-source projects, Starburst has its origins in Trino (formerly PrestoSQL) that was founded to help engineers make better use of their data.

Around 10 years ago, Facebook started to run into the issue of having too much data (300 petabytes) to analyze, just sitting in a data warehouse. As a company that thrives on analytics, they needed to find a better way to run more queries and get results faster. In the fall of 2012, a small group of Facebook Data Infrastructure engineers released Presto, an interactive query system that could operate fast, at petabyte scale.

After a few successful years, the Presto community split off from Facebook, forking it to form PrestoSQL, and the original product became PrestoDB. But this naming convention was confusing so they changed the name from PrestoSQL to Trino.

Today, Trino is a query engine that allows users to query data across distributed data sources and aggregate the results. Starburst delivers an enterprise and cloud solution that addresses data silos and speed of access problems for their customers. It’s the fastest and most efficient SQL-based MPP query engine for data lake, data warehouse or data mesh. It unlocks the value of distributed data by making it fast and easy to access, no matter where it lives.

In order to support their global customer base, Starburst had to build an application that could span across multiple geographies, achieve massive scale, and ensure 24/7 uptime – which is why they built Starburst Galaxy on CockroachDB.

First, it’s important to understand that Starburst’s architecture is massively decentralized because they serve customers that have distributed data. Trino runs everywhere – across AWS, GCP, Azure – in the EU, US, APAC – and so on.

The Starburst team was dealing with a unique type of wide-scale global distribution which is when their biggest challenge became clear: how do you build a centralized product with a distributed architecture?

They also needed a primary application database for the Starburst Galaxy web application which stores standard data like account information such as protected passwords. They also built their own metastore service and needed a reliable backend that could be used to access and query data anywhere globally. Replicating this metadata globally would be necessary, yet difficult to achieve without the right infrastructure to support them.

They needed a backend solution for this data, and they required the ability to:

Given these requirements, their options were limited. They didn’t want to use Spanner since they didn’t want to be tied to a cloud provider. They could have used Postgres, but they would have had to replicate it themselves and figure out the supporting tech that would allow them to make deploying across multiple regions possible.

And they certainly didn’t want to write it from scratch. They needed a cloud-agnostic solution that solved the multi-region challenge for them, which led them to CockroachDB.

“Why would I have my engineering team try to solve the multi-region problem when there’s an engineering team out there that’s already built a solid solution? We needed to make defensive, smart technology solution choices because we are on the hook for our customer’s data.” - Ken Pickering, VP of Engineering

Once they selected CockroachDB dedicated to support their cloud platform (Starburst Galaxy) they needed to figure out the best way to set up regions close to their customers to reduce latency and meet data compliance regulations. They also needed to ensure that if (and when) failover happens, their customers can still get access to their data.

They intended to serve customers in the United States, Europe, Asia Pacific, and eventually South America. If they did not set up regions correctly, their platform could be slow. Their tables are mostly read-heavy, and when it came to performance optimizations, it was really important to them that their application did not “feel slow”.

Ideally, when a customer queries their data, they would hit their local read node and not have to cross the world to access the data. This meant that their reads needed to be near-instant, while writes could be somewhat slower. Over time, they thought that their workload would become increasingly read-heavy (as most writes occur at the initial setup), so they needed to tackle this challenge now.

Given the nature of this data, they decided that they would leverage CockroachDB’s global table locality to ensure that read latency was really low. They were willing to compromise write latency in this scenario.

Prior to going into production, they worked with the Cockroach Labs team to determine the best scenario for minimizing latency. For example, they could have deployed their application across 4 AWS regions spread out among us-west-1, us-east1, eu-central, and ap-northeast-1. 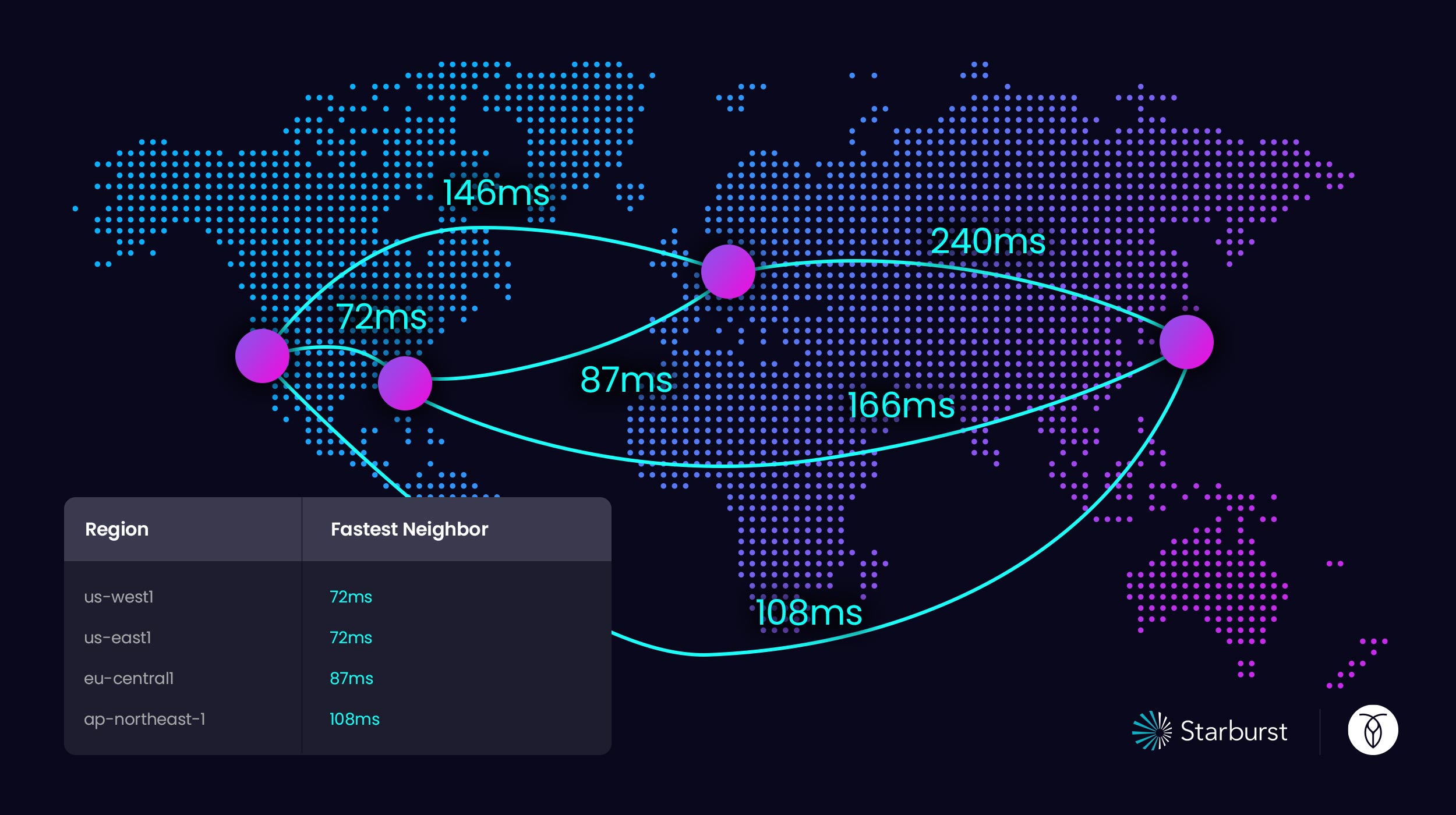 However, their survival goal = region failure, meaning that if an entire region went down (and assuming the app in that region is also down) their customers would be able to access their data from a replica in a region nearby. Given this survival goal, it was best to rearrange their setup and add an additional region. 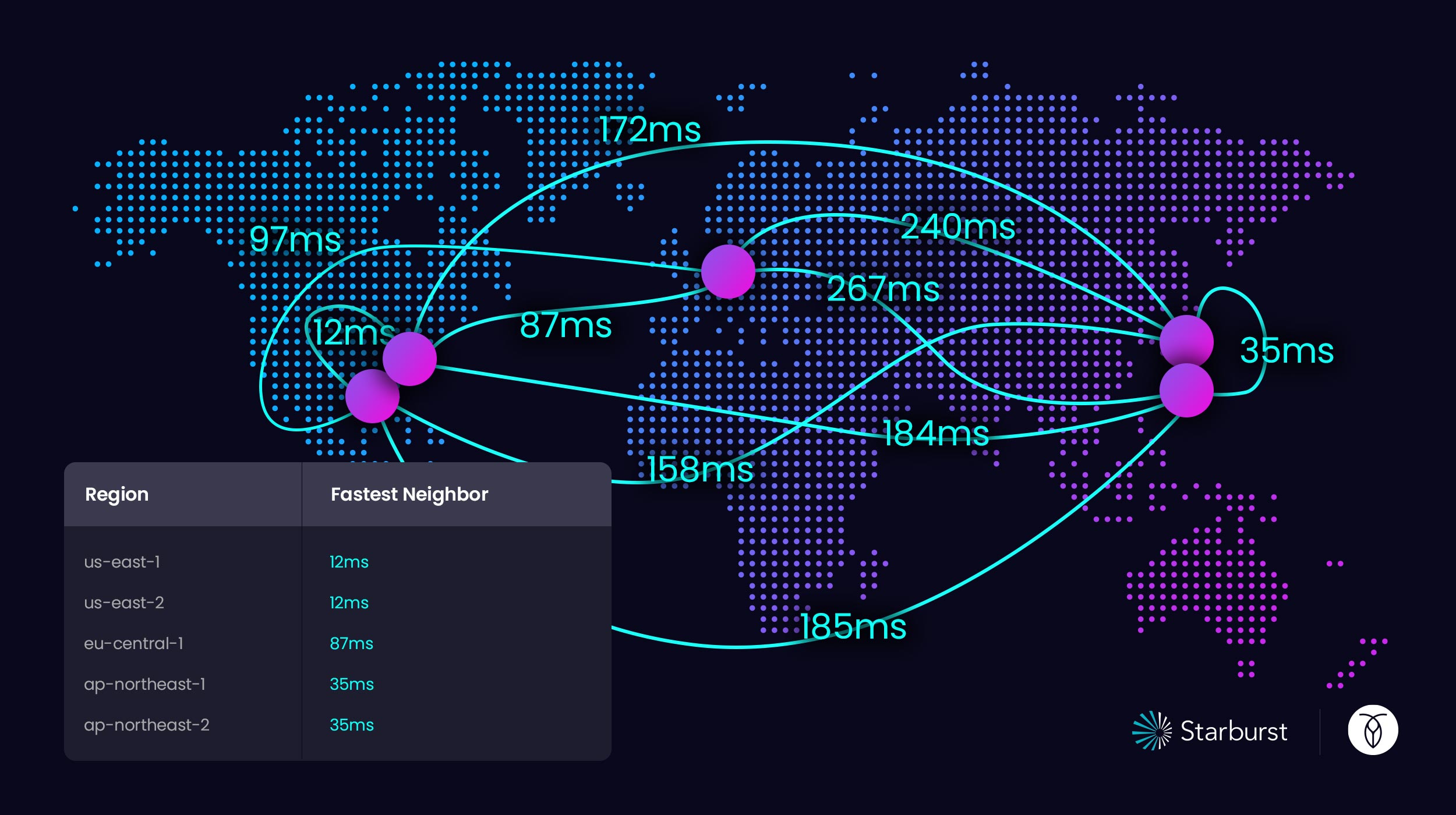 In the event that a region goes down, they have a plan:

Since Starburst went into production in November 2021, their approach to achieve their survival goals and minimize latency for their customers has been successful.

“We have to assume that at some point, some of the regions will go down. We can’t have > central gravity for this storage – it’s not possible. So even if our primary control > plane goes down and a failover hasn’t happened, the customers can still get access to > their data.” - Ken Pickering, VP of Engineering

There are certain assumptions within a tech stack that push you to operate a certain way. For example, you select one cloud provider, your ecosystem becomes static, and you have a certain amount of instances you are running at a certain threshold. But it doesn’t have to be this way.

Yes, there can be technical challenges associated with building a multi-region application, but for companies like Starburst, the benefits greatly outweigh the challenges. One decision that can be difficult is choosing the right cloud vendor to partner with.

All the vendors offer different regions and availability zones, and have nuances when it comes to operating their systems. It’s tough to find engineers who can run systems in different environments because it requires specialized expertises. Plus, network security is handled differently within each cloud environment which adds an additional layer of complexity.

Developing a plan for when (not if) an outage happens, is a responsibility Starburst takes very seriously. Right now their primary control plan is AWS and they have designed a multi-region application on CockroachDB so that they can failover to an adjacent region and ensure availability.

Their architecture is pretty portable and because CockroachDB is cloud-native and cloud-agnostic, they have options for the future should they want to change this setup. For example, they could choose to failover to a different cloud provider which is a good strategy to minimize downtime. Or they could choose to deploy across multiple clouds which would ensure availability even in the face of a total data center failure. Regardless of their strategy, knowing that they have options is key.

“In the future, I don’t want one database for AWS, one for GCP, and one for Azure. My on call and observability teams will have to look in a bunch of different places to find information. So CockroachDB’s flexibility to allow us to build the way that we did was really important.” - Ken Pickering, VP of Engineering

The concept of data mesh wasn’t really possible 10 years ago since the gravity of data was so heavy that it was difficult to move to one central place. Today, many companies still struggle with developing a single source of truth to access their data and they are growing increasingly tired of data management.

Starburst helps all types of companies that have distributed data (running workloads across multiple business units or multiple clouds) link it all together through secure data access. Their customer use cases span from stock trade violations at massive scale to detecting COVID-19 by analyzing patient data.

Over the next few years, Starburst is focused on improving their products and growing their customer base. They believe that there’s a future in separating storage and compute, and if they can make this easy to use, it will be a game changer. Along the way they will be relying on the power of Trino and CockroachDB to help make hybrid, multi-cloud, and multi-region use cases a reality.

“Yeah the tech is really cool, and it works great. But even more importantly, we trust > our business to run on CockroachDB. It’s storing our critical assets for us which is our customer data. We also know that there is a talented team behind the product that’s there to help us every step of the way.” - Ken Pickering, VP of Engineering